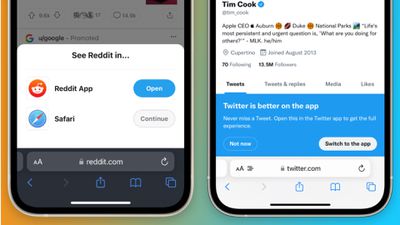 It's a common practice for websites that have accompanying iOS apps to push users to open (if they already have the app installed) or download their app from the App Store to view the content they're trying to view. It can be very annoying for end-users, though, as these pop-ups are usually rather intrusive to the actual content, creating a subpar experience.

Thankfully, there is a new way to block these pop-ups within Safari on ‌iPhone‌ and iPad. Developer Alex Zamoshchin has created a new Safari extension called "Banish" (via Daring Fireball) that can run on iOS and iPadOS and is designed to specifically get rid of those pop-ups. The app, which costs $2, helps eliminate a majority of those pop-ups in popular web versions of apps, but it doesn’t get rid of similar banners that show up at the top of Safari to recommend opening the current page in an installed app.

The banner at the top of Safari is built into Safari and WebKit itself, so to get rid of those, you'll have to uninstall the respective app from your device. Banish, instead, gets rid of pop-ups implemented in the websites themselves.

To use Banish, download it from the App Store and follow the on-screen instructions to give the app the needed permission within Settings, Safari, and Extensions. You can learn more about Banish here.

Moonjumper
Notice to website developers using this feature: If I was to move use to your app, it would likely be placed on the 8th home page of oblivion, never to be used again. Just let me use your website as a website.
Score: 36 Votes (Like | Disagree)

kk200
Apple needs to forbid splash ad screens in app. There are more and more apps show these annoying ad splash screens on startup, switch or even return from control center.
Score: 17 Votes (Like | Disagree)

Apple needs to forbid splash ad screens in app. There are more and more apps show these annoying ad splash screens on startup, switch or even return from control center.

The worst are those game ads, which trick you into tapping the „x“ and still automatically redirect you to the App Store. Even on android, you get a pop up asking, if you really want to get to the store or continue what u r doing
Score: 14 Votes (Like | Disagree)

scrm
I’ve had this app since reading about it on DF. It works great and the developer is very responsive too -- got an immediate response from him when I mailed him a site that didn’t block the pop-up (Substack.com).

Banish now joins Vinegar, 1Blocker and Noir in my arsenal of ‘make the web great again’ apps. Thanks Alex!
Score: 12 Votes (Like | Disagree)

iDarth_Betar
I’ll support this dev for $2

I’m sure it won’t be long till Apple brainwashes him into adding a subscription option by sending him some hypnotizing/subliminal email. But, what the hay…
Score: 11 Votes (Like | Disagree)
Read All Comments

Wednesday August 10, 2022 3:01 am PDT by Sami Fathi
Constant pop-ups, annoying forms, and frustrating website behaviors can make browsing and using the web an unpleasant experience. Thankfully on iOS, iPadOS, and macOS, several Safari extensions help turn the experience around. We've listed some Safari extensions that you may not have known about that can help remove annoyances and make a pleasant Safari experience. No More Cookies...
Read Full Article • 113 comments

Tuesday June 7, 2022 6:49 am PDT by Sami Fathi
Later this fall, Safari will be gaining the ability to translate web images with Live Text, support for push web notifications on iOS, extension syncing across iOS, iPadOS, and macOS, and more. With iOS 16 and macOS Ventura, Safari is gaining some small refinements following a more significant redesign last year. Last year, Apple introduced Safari extensions on iOS and iPadOS, and this...
Read Full Article • 37 comments

Wednesday August 17, 2022 6:53 am PDT by Hartley Charlton
Apple today announced new in-app Remix Sessions for GarageBand featuring Katy Perry and K-pop group SEVENTEEN, alongside an accompanying Today at Apple Session. The two new Remix Sessions, available as free downloads in the GarageBand app for iOS and iPadOS, include a range of loops, sounds, and instruments that allow users to put their own spin on the songs "Harleys in Hawaii" by Katy Perry ...
Read Full Article • 7 comments

Wednesday August 10, 2022 11:58 am PDT by Sami Fathi
A new analysis of the Instagram app has suggested that every time a user clicks a link within the app, Instagram is capable of monitoring all of their interactions, text selections, and even text input, such as passwords and private credit card details within websites inside the app. The analysis conducted by Felix Krause found that both Instagram and Facebook on iOS use their own in-app...
Read Full Article • 96 comments