Apple's forthcoming iPhone 14 base model will start at $799, the same entry price as last year's 6.1-inch iPhone 13, according to a new rumor coming out of East Asia. 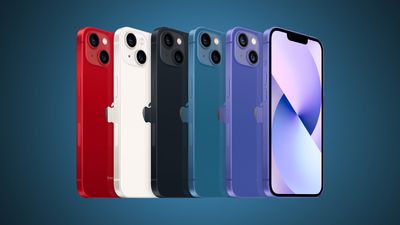 According to a post from the account "yeux1122" on the Korean blog Naver, Apple will not increase the price of its upcoming entry-level flagship device in order to boost sales and offset declining demand amid the global smartphone market slowdown.

The decision to impose a price freeze on the 6.1-inch iPhone 14 this year is alleged to have been made "at the top executive level," despite the company facing increased production costs and continued supply chain unrest.

The source of the rumor is said to come from an unnamed "major U.S. financial institution" with a track record for accuracy, a claim that MacRumors is unable to independently verify.

If Apple does launch the iPhone 14 at the same entry-level price point as last year's iPhone 13, it would be the second year running that the price of Apple's base flagship 6.1-inch iPhone model has remained the same. The base iPhone 12 launched in 2020 with the same $799 price tag.

The big difference this year of course is that iPhone sizes are changing and there will be no 5.4-inch iPhone 14 mini. The iPhone 13 mini was the most affordable flagship option in 2021, starting at $699, but it turned out to be unpopular with customers, therefore Apple is focusing on larger iPhone sizes for its flagship devices in 2022.

That contrasts with the iPhone 14 Pro models, which are expected to be powered by a faster A16 chip. They are also likely to do away with the display notch that has been a staple of Apple's flagship iPhones since 2017's iPhone X. Instead, the iPhone 14 Pro and iPhone 14 Pro Max are said to have some combination of a circular hole-punch cutout for the front-facing camera paired with a pill-shaped cutout to house key Face ID components.

The Naver account that today's rumor comes from has been the source of some accurate information in the past, including some details about the iPad mini 6 before it was launched.

The same account, did, however, incorrectly state that Apple would release an "iPad mini Pro" in the second half of 2021, which did not take place, so we are taking this latest rumor with a pinch of salt until other sources can corroborate it.

Hey what if the mini was just introduced to raise prices ,and planned to disappear 2 years later ?
Score: 19 Votes (Like | Disagree)

The iPhone 13 mini was the most affordable flagship option in 2021, starting at $699, but it turned out to be unpopular with customers

I wouldn’t say that. The people who bought the mini LOVE it. It’s just that apparently there weren’t enough of those people for Apple’s liking.
Score: 19 Votes (Like | Disagree)

Thursday January 26, 2023 12:14 pm PST by Juli Clover
New 14-inch and 16-inch MacBook Pro models with the latest M2 Pro and M2 Max chips are available in Apple retail stores and are already in the hands of customers, and we picked up one of the new M2 Max machines to answer all of the questions MacRumors readers considering a purchase might have. Subscribe to the MacRumors YouTube channel for more videos. Yesterday, we asked MacRumors fans on...
Read Full Article • 104 comments