The Brazilian Supreme Court has issued a favorable opinion to Apple in a long-running dispute over the exclusive use of the iPhone brand in the country, local media reports. 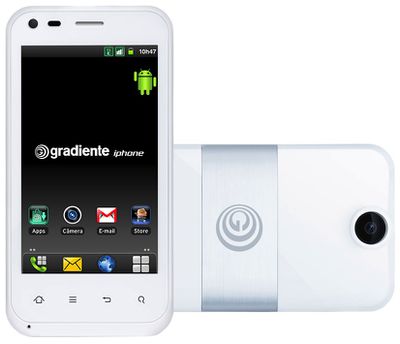 For those unfamiliar with the case, Brazil's highest court accepted a constitutional appeal in 2020 by ISB Electronica, an electronics company that registered the ‌‌iPhone‌‌ trademark in Brazil in 2000.

Under the name Gradiente, IGB Electronica produced a line of IPHONE-branded Android smartphones in Brazil in 2012, and there was a period of time where the Brazilian company was given exclusive rights to the ‌‌iPhone‌‌ trademark.

The appeal resulted in a trademark battle that saw both Apple and IGB Electronica given the rights to use the name in the country, but that didn't prevent back and forth judicial fighting between the two, with each company attempting to gain exclusive rights to the trademark.

A 2018 decision upheld a 2013 ruling that gave both brands permission to use the trademark, but then IGB Electronica revived the dispute in an attempt to get the 2018 decision reversed by Brazil's Supreme Federal Court.

In the latest development in the case, Brazilian Prosecutor General Augusto Aras last Friday gave his assent to Apple's position. Aras said that even though IGB Electronica applied to register the ‌iPhone‌ trademark several years before Apple's smartphone was launched, the "‌iPhone‌" brand has since become a globally recognized name, and therefore plays an important role in the world electronics market.

For this reason, Aras said the use of the ‌iPhone‌ brand should not be subject to the traditional question of who registered the name first, but instead the "supervening context and relevant factual changes" should be considered before a decision is made.

According to Tilt (via MacMagazine), the Prosecutor General's opinion has now been delivered to the Brazilian Supreme Court, which will hear the case and come to a decision, although a date for the hearing has not been scheduled.

Robert.Walter
Although I would like to see apple have exclusive use of the iPhone name, this decision is quite bizarre.

I’m not a trademark attorney but I’ve never heard of somebody losing their intellectual property (here ™) because some other player became more successful using that name both later and elsewhere.

This decision doesn’t really uphold the point of registering a trademark if it can later can be reversed on such convenient and spongy grounds.
Score: 20 Votes (Like | Disagree)

Although I would like to see apple have exclusive use of the iPhone name, this decision is quite bizarre.

I’m not a trademark attorney but I’ve never heard of somebody losing their intellectual property (here ™) because some other player became more successful using that name both later and elsewhere.

This decision doesn’t really uphold the point of registering a trademark if it can later can be reversed on such convenient and spongy grounds.

I agree that this seems unusual.

However, I think a big point here was that they didn't use the trademark until years after the iPhone was released. Which could make some see this as them trying to capitalize off the success of Apple's iPhone. Had they used it prior to the iPhone release, I wonder if this would've ended differently. Even though they registered it in 2000, they didn't actually have a product with the name until 2012.

I'm not a lawyer either though.
Score: 14 Votes (Like | Disagree)

ph001bi
Finally a logical decision by a court. It's amazing that it took 12 years and having to go to the Supreme Court in order to obtain this result.
Score: 8 Votes (Like | Disagree)

darngooddesign
Had they been making and selling "Iphones" before Apple released its "iPhone" then the decision likely would have been different.
Score: 6 Votes (Like | Disagree)

I agree that this seems unusual.

However, I think a big point here was that they didn't use the trademark until years after the iPhone was released. Which could make some see this as them trying to capitalize off the success of Apple's iPhone. Had they used it prior to the iPhone release, I wonder if this would've ended differently. Even though they registered it in 2000, they didn't actually have a product with the name until 2012.

I'm not a lawyer either though.

Since the indrotuction of the iMac it become common practice for copyright trolls and other brands to patent i[Devicename] as it's a pretty low hanging fruit in name terms, just slaps i in front of every possible name before anyone else and sue apple if they use "your" trademark in a new product or try to sell the rights to the name, that's basically what gradient did, they are not even in the market anymore for ages (last time I remember purchasing something from them was the N64, they got the rights to import nintendo products here for a time after nintendo ended the deal with playtronic who sold the SNES here), probably become a mutilaser like company who buy cheap whitelabel crap from aliexpress and resell there with their brand for 8x the cost. that's why apple stoped using i on the name of newer products, it's way harder for someone to launch a product named apple watch or apple tv than iWatch or iTv.
Score: 4 Votes (Like | Disagree)
Read All Comments

Friday July 15, 2022 10:37 am PDT by Juli Clover
Apple today submitted its final filing in the ongoing Apple v. Epic legal battle, which is playing out in the United States Court of Appeals for the Ninth Circuit. Both Apple and Epic Games chose to appeal the original ruling as neither company was satisfied with the outcome. The appeal battle has been ongoing since January, but it is wrapping up with Apple's cross-appeal brief, which...
Read Full Article • 183 comments

Wednesday June 15, 2022 4:26 am PDT by Tim Hardwick
Qualcomm has successfully appealed a 997 million euro ($1.05 billion) fine from EU antitrust regulators for paying Apple to use its LTE chips in iOS devices (via Reuters). The fine was imposed by regulators in 2018 after a European Commission investigation concluded that payments to Apple from 2011 to 2016 were made with the sole aim of blocking Qualcomm's LTE chipset market rivals, such as...
Read Full Article • 49 comments

Monday July 25, 2022 3:26 am PDT by Hartley Charlton
Apple has scaled up its orders for iPhone 14 components, in contrast to faltering Android devices, DigiTimes reports. Ahead of the launch of the iPhone 14 lineup in September, Apple has reportedly increased its component orders from suppliers. This comes in stark contrast to a range of Android brands, which continue to face sluggish sales, according to supply chain sources speaking to DigiTim...
Read Full Article • 40 comments

Monday July 25, 2022 5:11 am PDT by Hartley Charlton
The X14 Pro Max was today unveiled by Chinese low-cost smartphone brand LeBest, a phone that overtly imitates multiple iPhone design features. Android brands and other smartphone makers often come under fire for allegedly copying Apple. Priced at just $150, the LeBest X14 Pro Max is the latest device that looks to capitalize on the success of the iPhone by emulating many of its design...
Read Full Article • 106 comments

Deals: Protect Your iPhone During Summer Trips With Case Sales From Nomad, Casely, and Pad & Quill

Thursday June 23, 2022 8:06 am PDT by Mitchel Broussard
A trio of Apple accessory makers have introduced notable discounts on iPhone cases this week, offering up to 50 percent off protective cases for the iPhone 13, iPhone 12, and more. Nomad Starting with Nomad, our exclusive sale is taking 30 percent off the retailer's Sport Case lineup for the iPhone 13 family. Once you add one of the Sport Cases to your cart, you can enter the code MACRUMORS30 ...
Read Full Article • 4 comments

Wednesday May 25, 2022 1:08 pm PDT by Juli Clover
Epic Games and Apple are continuing with their legal dispute, and today, Epic Games filed its Appeal Reply and Cross-Appeal Response Brief, following Apple's appeal filing back in March. In the filing, Epic Games reiterates many of the same arguments that it made during the trial. The company believes that the district court "reached the wrong answer" and made "multiple legal errors." Apple, ...
Read Full Article • 257 comments

Wednesday July 6, 2022 3:12 am PDT by Tim Hardwick
Apple is expected to make its latest A16 processor exclusive to the Pro models in the iPhone 14 lineup, and that diversification strategy is set to become an annual trend in future iPhone series, according to a new report from analyst Ming-Chi Kuo. Earlier this year, Kuo said only the iPhone 14 Pro models will feature an A16 chip, with the standard iPhone 14 and iPhone 14 Max models to...
Read Full Article • 263 comments