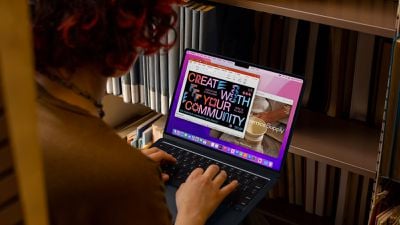 Hankey has fully led Apple's hardware design since Apple's former design chief Jony Ive departed the company in 2019. Ive remained a consultant to Apple through his independent design firm LoveFrom, but on Tuesday it was reported that Apple and Ive mutually agreed not to renew their contract, marking the end of a 30-year partnership.

The new MacBook Air does away with the notebook's iconic wedge-shaped design in favor of a flatter design, which Hankey described as "quite honest and simple."

"We don't really have to play any kind of games with shape or form to make it look thin," said Hankey, regarding the new design. "And I think that's one of the most lovely and remarkable things: it's quite honest and simple."

Hankey said the new MacBook Air was designed alongside the 14-inch and 16-inch MacBook Pro models that launched last year. "It was the first time we ever set out to do a family of products together," she remarked.

Hankey also revealed that the MacBook Air's new Midnight finish "came from the volcanic rock Basalt," adding that her dad was a geologist.

As for the 12-inch MacBook, which Apple discontinued in 2019, Bergeron admitted that the notebook had a "polarizing" design for some people.

Introduced in March 2015, the 12-inch MacBook featured a thin and light design that weighed just two pounds, and it was also Apple's first notebook with a fanless design and a USB-C port. The original model was powered by Intel's underwhelming Core M processor and introduced Apple's issue-prone butterfly keyboard design.

The new MacBook Air has some similarities with the 12-inch MacBook, including a fanless design, but the MacBook Air is still larger and heavier.

The new MacBook Air launches this Friday, with embargoed reviews of the notebook expected to be published tomorrow. In the United States, pricing starts at $1,199 for a configuration with the M2 chip, 8GB of unified memory, and a 256GB SSD.

ian87w
The wedge shape design of the Macbook Air is iconic, and it literally set up the whole PC laptop world to utilize that design. I mean every one literally copied the Macbook Air design. The slanted design was also more ergonomic.

Not saying the current design is bad, but it's obvious what Apple is doing. Cutting cost. Designing the Macbook Air alongside the new Macbook Pro will save Apple money in tooling and manufacturing cost. The non-wedge design will also save Apple cost from not having to use layered battery. It's all about cost savings, while selling it for more money. Tim Cook is happy.
Score: 35 Votes (Like | Disagree)

Hopefully, in the future, Apple will consider bringing it back.
Score: 34 Votes (Like | Disagree)

There's just not enough "Courage", yet.

Tim Cook already have the courage to sell a 2 year old laptop for the same launch price.
Score: 28 Votes (Like | Disagree)

As for the 12-inch MacBook, which Apple discontinued in 2019 ('https://www.macrumors.com/2022/07/09/12-inch-macbook-discontinued-three-years-ago/'), Bergeron admitted that the notebook had a "polarizing" design for some people.

So now that we have come further technology wise, particularly what the M1 offers compared to substantially slower dual core Intel processors, what’s stopping you from producing a significant better 12” MacBook?
Score: 27 Votes (Like | Disagree)

"There were definitely some things that we weren't able to fit into the product, because of its size."

In that case it should have been cheaper than the Air, not more expensive!
Score: 24 Votes (Like | Disagree)

So now that we have come further technology wise, what’s stopping you from producing a significant better 12” MacBook?

There's just not enough "Courage", yet.
Score: 22 Votes (Like | Disagree)
Read All Comments