Apple is expected to release the first public beta of iOS 16 for the iPhone this week, allowing anyone to test the software update for free. 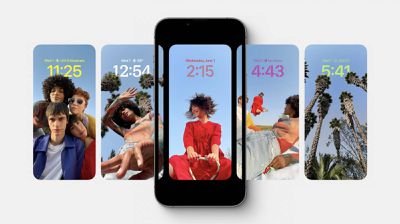 At WWDC last month, Apple announced that public betas of iOS 16, iPadOS 16, macOS Ventura, watchOS 9, and tvOS 16 would be released in July. Apple will also be releasing a public beta of HomePod software version 16, which is based on tvOS.

To get ready for the iOS 16 public beta, sign up for the free Apple Beta Software Program directly on an iPhone. The program lets you install a custom profile on your device that will enable you to install the beta over the air via Settings > Software Update when released. Public beta testers can provide feedback to Apple using the Feedback Assistant app.

While the iOS 16 beta has been relatively stable, it is still a beta, so you may encounter bugs, incompatible apps, reduced battery life, and other issues. Think carefully before deciding to install the public beta on an iPhone that you rely on for daily use.

iOS 16 is compatible with the iPhone 8 and newer. The software update, which should be released to all users in September, introduces a customizable Lock screen, the ability to edit or unsend iMessages, and many other new features.

AppleFan91
Oddly enough - Beta 3 has been by far the buggiest for me. 1 & 2 were fairly smooth but 3 has given me a ton of issues with apps crashing and issues with screen orientation issues. (It will rotate to landscape, then not rotate back, etc). Also, tapping on notifications on the Lock Screen does nothing for me, rather than going to the app. Pretty weird stuff.

Autocorrect, oddly enough, has been horrendous too.

Probably the worst beta to onboard public testers, but we’ll see, maybe I’m a 1-off
Score: 5 Votes (Like | Disagree)

Can't wait to try out the new lockscreen customisation! 1 for work focus and 1 for study focus etc

So far it’s a big ass mess. I hope they sort it out a few betas from now. I doubt many people will understand the work flow at this stage. Hell, I still don’t understand how to add a different Home Screen wallpaper from their suggestions without changing / adding a separate lockscreen wallpaper as well
Score: 3 Votes (Like | Disagree)

So far it’s a big ass mess. I hope they sort it out a few betas from now. I doubt many people will understand the work flow at this stage. Hell, I still don’t understand how to add a different Home Screen wallpaper from their suggestions without changing / adding a separate lockscreen wallpaper as well

That is the most frustrating and had me confused when I was first setting it up.
Score: 3 Votes (Like | Disagree)

Kylo83
Nothing in iOS 16 is existing for me; the Lock Screen looks kiddish and apart from that it’s more of a 15.7 update
Score: 2 Votes (Like | Disagree)

Does it already contain the new HomeKit architecture ?
I couldn't find anything at all about this.

Do we only need to install the latest beta on a hub (like tvOS 16 for example)?
Or does every device that interact with HomeKit also need to be updated?

The upsides of having a HomeKit that finally works as it should could overcome the downsides of being riddled with bugs because it's of course just a beta.

"In our testing thus far, it's hard to see much of a difference though. This is likely because Apple warns that all devices that communicate with HomeKit must be running the latest versions. Currently, several devices in our home are not running the betas." Everything new coming to HomeKit in IOS16 ('https://appleinsider.com/articles/22/06/09/everything-new-coming-to-homekit-in-ios-16')
Score: 2 Votes (Like | Disagree)

SFjohn
Can I install this and still back up to a 2014 Mac mini that will never run Ventura?
Score: 1 Votes (Like | Disagree)
Read All Comments