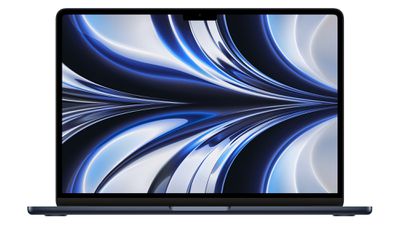 Announced in June at WWDC, the new updated and redesigned ‌MacBook Air‌ features the biggest design overhaul to the ‌MacBook Air‌ line since 2010, and is the first to feature the ‌M2‌ chip.

The new model features a slightly larger 13.6-inch display, a notch on the top bezel housing an upgraded 1080p camera, a uniform, flat body similar to the MacBook Pro, and new Starlight and Midnight color options.

Connectivity-wise, two USB-C ports are available on the ‌MacBook Air‌ along with a MagSafe port for charging purposes and a 3.5mm headphone jack with support for high-impedance headphones.

The next-generation ‌M2‌ chip features an 8-core CPU and up to a 10-core GPU, along with support for up to 24GB memory. Compared to the M1, the ‌M2‌ offers advancements in performance and efficiency with an 18% faster CPU, a 35 percent faster GPU, and a 40 percent faster Neural Engine.

Oh, it definitely makes sense. It just doesn’t make sense to you.
Score: 17 Votes (Like | Disagree)

TheYayAreaLiving ?
Congratulations to all who were able to place their order for a MacBook Air M2 ?
Score: 10 Votes (Like | Disagree)

t0rqx
Not gonna lie, it is a beautiful piece. Enjoy for the ones who gonna order.
Score: 10 Votes (Like | Disagree)

I am probably crazy but I ordered the 8GB/256Gb Base in Midnight.

Everyone is saying upgrade to 16Gb and 512Gb ... but that is too rich for me for what will be a general OA and web browsing machine. Also in UK that configuration would be too close to the MBP 14 price. The next up-sell would be tempting but where does it end ?

so... and I held off on placing the order until the delivery date had slipped a few weeks. I can then see the early reviews and get confirmation that 8/256 is usable...whilst still having a place in the queue.

I think you made the right choice. Max Tech, the biggest purveyors of the 256GB scare, were putting the M2 MBP through torture tests that 99% of users will never do. They got it to overheat and throttle on Red Raw 8K footage, something that a year ago required a Mac Pro to even think about doing. Why would any power user be looking at an entry level machine when a 14" MBP can be had for a tiny bit more with loads of advanced features? If you're thinking of serious editing of 8K Red Raw footage, you're looking at the wrong machine.

Others who tried similar things, like the Everyday Dad, couldn't even get his fans to go to more than 50% on his torture tests, with the laptop remaining quite cool. IMO, the issue is way overblown, though I'm sure Apple is laughing all the way to the bank with all the FUD causing people to buy more storage and RAM than they need.

i doubt you will notice any difference whether you had bought a 512GB configuration or a 256GB with what you're using it for.
Score: 9 Votes (Like | Disagree)

mr_jomo
Got a sweet deal on a 14" Pro for the wife (she's one of them multi-screen, creative types ;)), handed off my M1 Air to a high school-bound daughter (her Windows machine just kicked the bucket) and ordered a space gray M2 16/512 Air (inbound July 25) for myself ... computers all sorted for the next couple of years?).
Score: 7 Votes (Like | Disagree)