The upcoming launch of Apple's redesigned MacBook Air with the M2 chip has some Windows laptop manufacturers "worried" that sales of Intel-based laptops will be negatively affected, according to industry sources cited by DigiTimes. 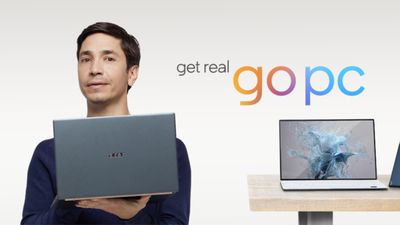 "A Wintel brand vendor pointed out that at a price point of US$1,000-$1,500, the MacBook Air will crowd out other high-end notebooks," the report claims, with "Wintel" referring to Windows laptops powered by Intel processors. The report added that "upgrades to the M2 processor, camera lens, and casing put the slight price increase of the new MacBook Air within an acceptable range for consumers."

Pricing for the new MacBook Air starts at $1,199 in the United States, with the M2 chip offering up to 18% faster CPU performance and up to 35% faster graphics performance compared to the already impressive M1 chip in the previous model. Apple says the new MacBook Air will be available in July, with an order date expected to be announced soon.

In 2020, Apple announced that the Mac lineup would be transitioning from Intel processors to its own custom-designed silicon chips, with Apple promising industry-leading performance per watt. The transition is now nearly complete, with the only remaining Intel-based Macs sold being a higher-end Mac mini configuration and the Mac Pro tower, both of which are expected to be updated with Apple silicon chips later this year.

Apple silicon has been game changing for the Mac lineup. In 2020, benchmarks revealed that the $999 MacBook Air with an M1 chip outperformed a $2,999 maxed-out Intel-based 16-inch MacBook Pro. Likewise, the M2 chip is faster than the 8‑core Intel Xeon W processor in the base model Mac Pro tower, which starts at $5,999.

ChromeCloud
I guess it's time for the EU to regulate the market and force Apple to give their processors and license macOS to every other PC brand so that they can keep up. /sarcasm
Score: 77 Votes (Like | Disagree)

Razor_Crest
I felt a great disturbance in the force, as if millions of consumers suddenly cried out in happiness, and then left Intel. I fear something amazing has happened.
Score: 75 Votes (Like | Disagree)

adamw
They should all be worried about Apple. Hopefully the MacBook Air with M2 chip will not have same SSD reduced speed "feature" which Max Tech discovered the base model 13" MacBook Pro M2 has. Apple needs good press for all M2 Mac models, and Apple should not provide a reason for the tech press to bad mouth them, by using a downgraded, slower SSD chip design in their base M2 models.
Score: 42 Votes (Like | Disagree)

zorinlynx
They should be worried. I haven't seen real innovation on the Windows laptop side in a while. A lot of new laptops are still shipping with low-DPI screens and CPUs that require loud fans to cool them when you do pretty much anything.

Apple Silicon Macbooks are absolutely ground-breaking. I really hope they end up kicking the rest of the industry into innovating again.
Score: 41 Votes (Like | Disagree)

Eagle_Eye
And they all should blame Intel for lack of innovation and optimization. If Intel acted earlier, this worrying wouldn't be necessary.
Score: 40 Votes (Like | Disagree)

iBreatheApple
What’s different now than the past 10 years that makes them worry more?
Score: 39 Votes (Like | Disagree)
Read All Comments

Tuesday August 9, 2022 4:43 am PDT by Sami Fathi
Intel, AMD, and Nvidia are all reportedly bracing for a possible decline in shipments as well as a possible drop in revenue for the remainder of 2022 while the Mac is expected to continue to grow in popularity. Citing industry sources, DigiTimes reports that Intel, AMD, and Nvidia have revised and lowered their own expectations for how many chips and products they'll ship in 2022 and their...
Read Full Article • 97 comments

Friday July 8, 2022 5:00 am PDT by Tim Hardwick
Apple's new MacBook Air with the M2 chip is now available to order on Apple's online store. Deliveries to customers and in-store availability will begin Friday, July 15. Announced in June at WWDC, the new updated and redesigned MacBook Air features the biggest design overhaul to the MacBook Air line since 2010, and is the first to feature the M2 chip. The new model features a slightly...
Read Full Article • 291 comments

Wednesday June 29, 2022 5:23 pm PDT by Sami Fathi
The redesigned MacBook Air with the all-new M2 Apple silicon chip will be available for customers starting Friday, July 15, MacRumors has learned from a retail source. The new MacBook Air was announced and previewed during WWDC earlier this month, with Apple stating availability will begin in July. The MacBook Air features a redesigned body that is thinner and lighter than the previous...
Read Full Article • 336 comments