Apple today began selling some additional accessories through its online store, including a 70W charger from Belkin with dual USB-C ports. The charger can be used to charge a MacBook at up to 50W and an iPhone or iPad at up to 20W simultaneously. It is ideal for charging any MacBook Air, but it is also compatible with MacBook Pro models. 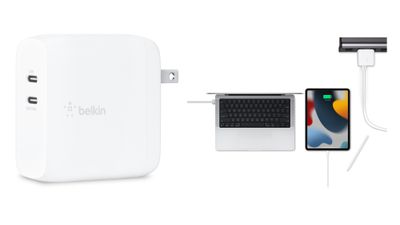 The charger is built with gallium nitride (GaN) material for a more compact design and improved charging efficiency compared to traditional silicon-based chargers. In the United States, the charger features foldable prongs and is priced at $59.95, and a 65W version of the charger with a Type G plug is available in the United Kingdom.

Apple released its own 35W dual USB-C chargers earlier this month, with compact and standard size options priced at $59 each. Belkin's charger offers double the total wattage at a nearly identical price point, providing customers with a more versatile and affordable option for charging multiple Apple devices at the same time.

Belkin's updated 3-in-1 wireless charging stand with MagSafe has also been made available to order through Apple's online store after being announced earlier today. The new version of the stand adds fast charging support for the Apple Watch Series 7, allowing the watch to charge from 0% to 80% battery life in approximately 45 minutes.

The stand remains able to charge an iPhone 12 or newer via MagSafe at up to 15W speeds, and an AirPods or AirPods Pro case at up to 5W speeds. In the United States, the stand is priced at $149.95 and is available in white or black.

Apple has also started selling OtterBox's 2-in-1 wireless charging stand with MagSafe for $129.95. The stand features a MagSafe charger that can charge an iPhone, or an AirPods case when tilted upright, along with a magnetic charging puck for the Apple Watch that is said to include fast charging support for the Series 7.

Meanwhile… over at Anker on Amazon..

Can’t believe these are getting attention

Consumers want quality products that have been thoroughly tested, meet stringent standards, and guarantee 100% compatibility with their favorite devices.
Score: 4 Votes (Like | Disagree)

Consumers want quality products that have been thoroughly tested, meet stringent standards, and guarantee 100% compatibility with their favorite devices.

Anker Lightning cables are vastly superior to Apple’s - they don’t fray and gunk out. Their chargers have been rock-solid in my experience and are generally well reviewed. Their portable batteries are top-notch. They make the best baby monitor. Their Bluetooth smart scales and their robotic vacuum cleaners are among the best. Just one guy’s opinion of course but Anker sits higher up in my book than these overpriced Apple Store MFI favourites. To each their own!
Score: 4 Votes (Like | Disagree)

zorinlynx
To this day I don't understand why Apple sells an $80 96W Macbook charger that only has ONE USB-C port on it. The thing is huge and heavy and massive, surely they could have port a second port, or hell, FOUR ports on that thing and make it an awesome charging solution for all your stuff at once?

But nope... BIG BRICK with only one port on it, and they let the competition make more versatile chargers. The heck you doing over there Apple?
Score: 4 Votes (Like | Disagree)

Any deals on the now discontinued one with slower Apple Watch charging? Have always wanted one but never wanted to pay $150 for one.

fwmireault
For my fellow Canadians, the Logitech Circle View doorbell ('http://Sonnette filaire Circle View de Logitech https://store.apple.com/xf/xc/product/HPGS2VC/A'), which was US exclusive since its launch, is now showing on the Canadian Apple Store. Not avaible for purchase yet, but it’s probably coming soon!
Score: 3 Votes (Like | Disagree)

troy14
Meanwhile… over at Anker on Amazon..

Can’t believe these are getting attention
Score: 1 Votes (Like | Disagree)
Read All Comments

Tuesday June 28, 2022 1:06 pm PDT by Juli Clover
Belkin today announced the launch of an upgraded Boostcharge Pro 3-in-1 Wireless Charging Stand that's designed for the iPhone, Apple Watch, and AirPods. Compared to the prior-generation model, the new 3-in-1 charger features fast charging support for the Apple Watch Series 7. The upgraded Apple Watch charging puck is able to charge an Apple Watch Series 7 from 0 to 80 percent in...
Read Full Article • 51 comments

Apple's Slowest iPhone Charger No Longer Available in Some Countries

Monday August 15, 2022 7:04 am PDT by Joe Rossignol
Apple's slowest iPhone charger with an outdated 5W USB port is no longer available to purchase in some countries around the world. As noted by Japanese blog Mac Otakara, the 5W charger is currently sold out on Apple's online store in Japan. With a quick spot check, we found the charger is also sold out or completely removed on Apple's online store in Australia, New Zealand, France, Germany,...
Read Full Article • 74 comments

Thursday August 4, 2022 12:09 pm PDT by Juli Clover
Apple today updated its online store to offer several new Mophie products, including the Powerstation Pro, GaN 120W Charger, and multiple car chargers. Priced at $150, the Mophie Powerstation Pro offers 20,000mAh for charging iPhones, iPads, and other Apple devices. It offers up to 45W, so it is able to charge a MacBook Air, plus it can fast charge the iPhone and the iPad. There are dual...
Read Full Article • 29 comments