Apple in iOS 16, iPadOS 16, tvOS 16, and macOS Ventura is introducing a new "Passkeys" feature that replaces traditional passwords when signing into a website or an app. Passkeys are more secure than passwords, and protect users from phishing, malware, and other attacks aimed at gaining account access. 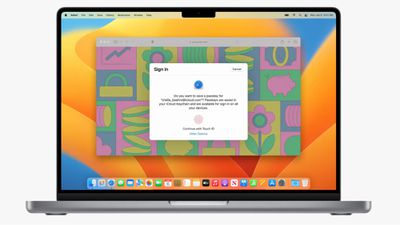 According to Apple, Passkeys are next-generation credentials that are safer and easier to use than standard passwords. As Apple explains in a support document on the feature, Passkeys are built on the WebAuthn standard and use a unique cryptographic key pair for each website or account.

One key is public and stored on the website server, while the second key is private and kept on-device. On the iPhone and other devices with biometric authentication, Face ID or Touch ID is used to authorize the passkey to authenticate the user to the website. The keys must match to allow for a log in, and because the second key is private and available only to the user, it cannot be stolen, leaked, or phished.

Passkeys rely on iCloud Keychain, which in turn requires two-factor authentication for further protection. Passkeys sync across all of a user's devices through ‌iCloud‌ Keychain, which is end-to-end encrypted with its own cryptographic keys.

Passkey synchronization across accounts provides redundancy in case an Apple device is lost, but should all of a person's Apple devices become lost and the passkeys along with them, Apple has implemented an iCloud keychain escrow function to recover passkey information. There is a multi-step authentication process to go through to recover an ‌iCloud‌ Keychain with passkeys, or users can set up an account recovery contact.

Though Passkeys sound complicated on paper, in practice, it will be as simple as using ‌Touch ID‌ or ‌Face ID‌ to create a passkey to go along with a login.

Apple has been working with members of the FIDO Alliance, including Google and Microsoft, to ensure that passkeys can also be used with non-Apple devices and across platforms. On non-Apple devices, Passkeys will work through QR codes that will authenticate using the ‌iPhone‌, but it will require support from other companies, so it's a standard that needs to be adopted across the tech world.

There are unknowns about what happens to passkeys when transitioning away from Apple to another platform like Android, as Apple has not detailed what would happen in this situation.

Apple says that transitioning away from passwords is going to take some time, but it will be working with developers to create a passwordless future.

Passwordless Future. Nice!!! Not going to lie this does seem well encrypted and secured.

TheYayAreaLiving ?
Passwordless Future. Nice!!! Not going to lie this does seem well encrypted and secured.
Score: 19 Votes (Like | Disagree)

They will think of something.
Score: 15 Votes (Like | Disagree)

They will if some EU company objects.
Score: 15 Votes (Like | Disagree)
Read All Comments

Friday May 20, 2022 6:46 am PDT by Mitchel Broussard
1Password has introduced a new deal this week, offering 50 percent off the first year of both its individual and family plans. Like previous offers, this sale is available for new 1Password subscribers only, and it does not require a coupon code. Note: MacRumors is an affiliate partner with 1Password. When you click a link and make a purchase, we may receive a small payment, which helps us...
Read Full Article • 144 comments

Monday June 6, 2022 2:20 pm PDT by Juli Clover
The iOS 16 update includes a range of quality of life improvements that make using an iPhone a more enjoyable experience, and one of those tiny improvements is access to the password for the WiFi network that you're currently connected to. If you're at a friend or family member's house and don't know the password to the WiFi network offhand even though you've connected to it previously,...
Read Full Article • 47 comments

Deals Exclusive: Get Your First Year of the 1Password Individual Plan for 50% Off

Wednesday February 16, 2022 10:36 am PST by Mitchel Broussard
We've partnered with 1Password again this month, this time offering our readers a chance to get 50 percent off their first year of 1Password for Individuals. This offer is available to new customers only, and it doesn't require a coupon code. Note: MacRumors is an affiliate partner with 1Password. When you click a link and make a purchase, we may receive a small payment, which helps us keep...
Read Full Article • 114 comments

Thursday May 5, 2022 5:56 am PDT by Joe Rossignol
Apple, Google, and Microsoft today announced plans to expand support for a passwordless sign-in standard created by the FIDO Alliance and the World Wide Web Consortium (W3C), promising a faster, easier, and more secure sign‑in process. The expanded standards-based capabilities will give websites and apps the ability to offer an end-to-end passwordless sign-in option, according to the...
Read Full Article • 96 comments

Tuesday June 7, 2022 1:00 pm PDT by Juli Clover
Apple's Safari browser has a built-in password suggestion feature across iOS and macOS, and with iOS 16, iPadOS 16, and macOS Ventura, it's getting more convenient than ever. Across these platforms, there is now an option to edit a strong password that is suggested by Apple, which allows it to be tailored to site specific requirements. Websites sometimes have password creation requirements...
Read Full Article • 41 comments

1Password 8 for Mac Released With New Design and Features

Tuesday May 3, 2022 7:12 am PDT by Joe Rossignol
AgileBits today announced the release of 1Password 8 for Mac with a redesigned interface and several new features. The popular password manager has been redesigned to better match the look of macOS Monterey, from the sidebar and unified toolbar to the typography and iconography. The new design language extends to 1Password for Safari on the Mac. 1Password 8 improves productivity with a...
Read Full Article • 333 comments

Monday June 20, 2022 8:44 am PDT by Joe Rossignol
Tapping on images of traffic lights or deciphering squiggly text to prove you are human will soon be a much less common nuisance for iPhone users, as iOS 16 introduces support for bypassing CAPTCHAs in supported apps and websites. The handy new feature can be found in the Settings app under Apple ID > Password & Security > Automatic Verification. When enabled, Apple says iCloud will...
Read Full Article • 130 comments