iOS 16 adds a long-awaited feature set allowing you to edit and unsend iMessages that you've sent to someone, but as it turns out, there is a time limitation. 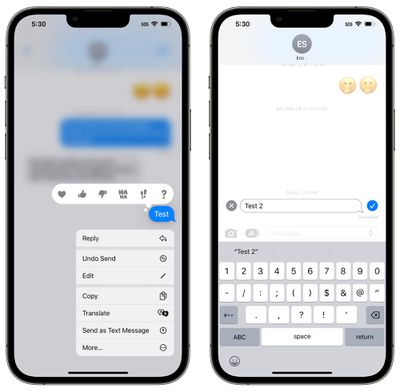 You can edit or unsend an iMessage up to 15 minutes after it's been sent, but after that, it is uneditable and can no longer be unsent.

Apple warns that people running earlier versions of iOS are able to see messages that have been unsent, even if it is no longer visible on your end.

You can edit or undo an iMessage by long pressing on it in an iMessage conversation and tapping on either "Edit" or "Undo Send." Note that these features are limited to blue bubble iMessages and do not work with green SMS messages.

In addition to these two features, there is a "Mark as Unread" option for when you want to respond to a message at a later time but don't want to forget, and all of your unread messages can be seen in the new "Unread Messages" folder under Filters.

We went from Steve Jobs annoucing the iPod, the iPhone, the iPad, the Macbook Air.... to some random guy annoucing we can unsend a message.

To be fair, Steve… had a tendency to monopolize keynotes. To the point where he became the public face of every team of the company. Tim Cook seems to prefer letting the lead developers/project managers/VPs for each team present (and get credit for) their contributions. The latter goes a long way towards dissociating Apple from being that one guy
Score: 18 Votes (Like | Disagree)

Wonder if read receipts are affected if someone marks as unread?

vanylapep
We went from Steve Jobs annoucing the iPod, the iPhone, the iPad, the Macbook Air.... to some random guy annoucing we can unsend a message.
Score: 9 Votes (Like | Disagree)

I have no idea why people would enable read receipts.
Score: 8 Votes (Like | Disagree)

apparatchik
We need an “uncall” feature for certain nights
Score: 8 Votes (Like | Disagree)
Read All Comments

Sunday February 5, 2023 6:06 am PST by Hartley Charlton
A new version of the Mac Studio with the "M2 Ultra" chip is unlikely to arrive in the near future, according to Bloomberg's Mark Gurman. In the latest edition of his "Power On" newsletter, Gurman explained that since the upcoming Apple silicon Mac Pro is "very similar in functionality to the Mac Studio," Apple may wait until the release of M3- or M4-series chips to update the machine, or...
Read Full Article • 506 comments

Saturday February 4, 2023 1:30 am PST by Hartley Charlton
Google's Chromium developers are working on an experimental web browser for iOS that would break Apple's browser engine restrictions, The Register reports. The experimental browser, which is being actively pursued by developers, uses Google's Blink engine. Yet if Google attempted to release it on the App Store, it would not pass Apple's App Review process. Apple's App Store rules dictate...
Read Full Article • 303 comments