As Apple prepares for a rumored launch of its completely redesigned MacBook Air, Microsoft is preparing for competition by beefing up its own entry-level Surface Laptop Go with a new processor, updated thermals, and an improved webcam. 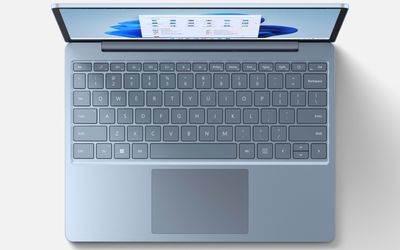 The Surface Laptop Go, launched in 2020, has served as the entry-level Surface laptop in Microsoft's lineup. The laptop, which previously started at $549 (now $599), features a 12.4-inch touchscreen display, a full-sized keyboard, and trackpad, and runs Windows 11.

Powered by Intel's 11th generation i5 processor, Microsoft has improved the thermals inside the Surface Laptop Go 2 to be “quieter” and make it easier for users to focus. Microsoft also says that it's updated the webcam, however, as The Verge notes, the webcam is still stuck at 720p, so the improvements are likely in image processing. Apple's current ‌MacBook Air‌ similarly features a 720p webcam, while the MacBook Pro has been updated to 1080p.

Now starting at $599, the Surface Laptop Go 2 is considerably cheaper than Apple's ‌MacBook Air‌ which starts at $999. For the added $399, however, users benefit from the performance and energy efficiency of Apple silicon and a base storage of 256GB.

The latest ‌MacBook Air‌ was released in November 2020 with the M1 chip, but a new, completely redesigned model could be announced as soon as next week. The new model will benefit from a new or existing Apple silicon chip, alongside an entirely redesigned body that comes in several colors.

PieTunes
4GB of RAM is still a thing?

by saying the Surface offers "30% more key travel than a MacBook Air.”

Oh, well it's game over. Microsoft has won! How will Apple ever recover?
Score: 18 Votes (Like | Disagree)

I dont understand the power button being second to the right ?

On the keyboard of Windows-based devices, the upper-rightmost key is generally the "Delete" key. Putting the power button there would increase the possibility of accidentally putting the system into sleep/suspend. The placement of the power key there (if there has to be one on the keyboard) is better (relatively speaking)
Score: 18 Votes (Like | Disagree)

ZMacintosh
I dont understand the power button being second to the right ?
Score: 15 Votes (Like | Disagree)

Queue MacRumors members complaining that it looks exactly like a MacBook.

Actually looks better than many of the MBA Mockups. Proof you can make laptops in colors without ugly white/light grey bezels and keyboards.
Score: 9 Votes (Like | Disagree)

Spock
You gotta love when they only comparison they can really make to a MacBook Air is key travel.. They did not even mention it being cheaper than the MacBook Air. Even though getting one with similar specs to the Air makes it almost as expensive.
Score: 7 Votes (Like | Disagree)
Read All Comments