Google Maps' Street View is 15 years old today, and to celebrate, Google is rolling out the ability to view historical imagery when using the service on iOS and Android. 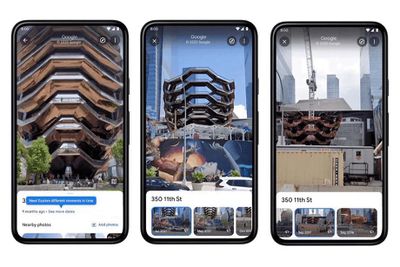 Google says the feature can show imagery dating all the way back to the launch of Street View in 2007, albeit in locations where it was available at the time. The ability to display historical imagery has been available on the desktop version of Google Maps since 2014, but this is its debut on the mobile app.

Coinciding with Street View's 15th anniversary, Google has also announced that it will deploy a new camera next year to capture more high-quality images in harder to reach places.

In addition to our Street View car and trekker, we're piloting a new camera that will fully roll out next year to help us collect high-quality images in more places. This new camera takes all the power, resolution and processing capabilities that we've built into an entire Street View car, and shrinks it down into an ultra-transportable camera system that's roughly the size of a house cat. But unlike house cats, it's ready to be taken to remote islands, up to the tops of mountains or on a stroll through your local town square.

Google says the new camera weighs less than 15 pounds, allowing it to be shipped anywhere, and it's designed to be modular so that components like lidar can be added to collect imagery with even more helpful details, like lane markings or potholes. The camera can also be attached to any vehicle with a roof rack and operated via a mobile device. "You'll start seeing our new camera in fun Google colors alongside our iconic Street View cars and trekkers next year," says Google.

Google is also taking the anniversary of Street View to again highlight its upcoming new Immersive view for cities. Immersive view uses artificial intelligence and high-quality 3D rendering to simulate real-time data, and the feature is set to launch later this year.

Sandstorm
Awesome, really love to see progress/changes over the years. Was wondering why this was only available on desktop.
Score: 3 Votes (Like | Disagree)

still not compelled to use aapl maps over google maps

maxfromdenmark
I’m personally on the 3 places photographed by Google in the world. The last one yesterday in Stockholm ?
Score: 1 Votes (Like | Disagree)

Google seems to updated all the roads around me last year except mine! Mines from 2009 :(

Mine is from 2012... and shows nothing but forest as that's what it was at the time.

Ironically I was behind an Apple Maps van back in 2018.
Score: 1 Votes (Like | Disagree)

contacos
Haha in Germany the latest ones are from 2008 anyway
Score: 1 Votes (Like | Disagree)

Haha in Germany the latest ones are from 2008 anyway

Was about to say this. Hooray for paranoia
Score: 1 Votes (Like | Disagree)
Read All Comments

Thursday May 12, 2022 4:11 am PDT by Tim Hardwick
Google Maps is set to get a new Immersive view for cities that uses artificial intelligence and high-quality 3D rendering to simulate real-time data, Google has announced. Thanks to advances in computer vision and AI that allow us to fuse together billions of Street View and aerial images to create a rich, digital model of the world — we're introducing a whole new way to explore with...
Read Full Article • 122 comments

Thursday November 17, 2022 1:31 pm PST by Juli Clover
Google is bringing a new augmented reality Live View feature to its Maps app, allowing smartphone users to visually search for restaurants, coffee shops, and other businesses that are located nearby. Using Live View, you can open up Maps and tap the camera icon in the search bar to see what's around you, from shops and banks to ATMs and bars. Google Maps will provide AR-powered directions...
Read Full Article • 44 comments

Wednesday July 27, 2022 2:29 am PDT by Tim Hardwick
Google is rolling out some new Maps features to its iOS and Android apps for the summer, including new location sharing options, cycling directions enhancements, and photorealistic aerial views of famous city landmarks. First, location sharing. Google says it wants to make it easier to see when someone who has shared their location with you arrives or leaves a place, "so you can more easily...
Read Full Article • 35 comments

Senator Asks FTC and DOJ for 'Rigorous Oversight' Into Apple, Google, and Amazon's Expansion Into Automobiles

Wednesday November 2, 2022 9:53 am PDT by Juli Clover
United States Senator Elizabeth Warren this week penned a letter [PDF] to antitrust officials at the Federal Trade Commission and the Justice Department, requesting that they investigate "Big Tech's expansion into the automotive industry." Warren specifically called out Google, Apple, and Amazon, saying that the companies are setting themselves up to be a "one-stop shop for automakers," for data...
Read Full Article • 159 comments

Monday November 21, 2022 8:42 am PST by Joe Rossignol
Apple Derby Street in the Boston suburb of Hingham, Massachusetts was struck by a vehicle on Monday morning, according to local ABC affiliate WCVB. The report claimed that multiple people were injured and said first responders and ambulances were on scene. Image Credit: WCVB Shortly before 11 a.m. local time, a black SUV crashed through the store's glass facade at a high rate of speed and...
Read Full Article • 317 comments

Monday September 12, 2022 7:09 am PDT by Joe Rossignol
Just a few hours before Apple releases iOS 16 to the public, Google has previewed its upcoming Lock Screen widgets for its iPhone apps, including the Google app, Gmail, Google Maps, Chrome, Google News, and Google Drive. Google says the Lock Screen widgets will be available in the "coming weeks" as its iPhone apps are gradually updated on the App Store. The widgets allow users to quickly...
Read Full Article • 29 comments

Tuesday November 8, 2022 11:51 am PST by Joe Rossignol
Apple today announced that it will be opening an impressive new street-facing store in Vancouver, British Columbia on Friday, November 18. Credit: Apple The new Apple Pacific Centre store is positioned diagonally on the corner of West Georgia and Howe Streets and faces the Vancouver Art Gallery. To celebrate the grand opening of the store, the glass facade is wrapped in colorful artwork...
Read Full Article • 33 comments