Apple last week introduced the 2022 iPhone SE, an upgraded version of its low-cost smartphone. The ‌2022 iPhone SE‌ looks identical to the 2020 model, featuring only internal upgrades, and it is arguably Apple's most lackluster ‌iPhone‌. So who is it for? Read on to find out what we think.

Subscribe to the MacRumors YouTube channel for more videos.
If you've seen the 2020 iPhone SE, well, you've seen the 2022 version. Apple has not made any exterior updates, and it still looks like the ‌iPhone‌ 8 that was introduced in 2017. This five-year-old design features thick top and bottom bezels along with a Touch ID Home button. It's the last ‌iPhone‌ to continue to use ‌Touch ID‌, as Apple has transitioned to Face ID for the rest of the lineup. 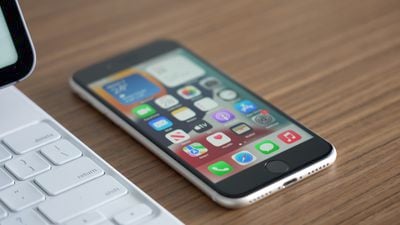 Apple didn't even spend too much time thinking about new colors for the ‌iPhone SE‌. It comes in starlight, which is almost identical to the previous silver, midnight, which is not too far off from the prior black color, and (PRODUCT)RED, which was also available for the 2020 model. Apple did make it out of more durable glass, but glass is glass and it's still going to break when dropped onto hard surfaces, so that's not much of a reason to upgrade.

The new ‌iPhone SE‌ is equipped with the latest A15 chip, which is an upgrade over the A13, though it's hard to tell a difference in terms of day to day usage. Apps and games perform about the same, but the A15 chip will make a difference several years from now as Apple develops new versions of iOS and new features that require more processing power.

There's a single-lens 12-megapixel rear camera that has updated features like Smart HDR 4 and Photographic Styles powered by the A15, but when looking at photos from the 2020 and ‌2022 ‌iPhone‌ SE‌ models side by side, there's little difference in quality. Battery life is also about the same.

The other major difference between the 2020 ‌iPhone SE‌ and the upgraded model is support for sub-6GHz 5G networks. 5G is still in its infancy, so 5G support is important for future proofing. The new SE doesn't support the fastest mmWave 5G speeds that are mostly limited to more urban areas, but it does work with the wider spread sub-6GHz bands that are going to expand worldwide in the coming years.

From the perspective of Apple enthusiasts who look forward to the latest and greatest each year, the ‌iPhone SE‌ is a disappointing phone, but that's not who it's for. Apple made the ‌iPhone SE‌ for the people who don't care about phones, those who just want a smartphone that's fast, simple, reliable, and most importantly, cheap.

At $429 the ‌iPhone SE‌ is more expensive than the prior-generation model, but in six months or so, it should come down in price with various carrier discounts and deals. It's the go-to phone for those who are upgrading from something like an ‌iPhone‌ 6, ‌iPhone‌ 7, or ‌iPhone‌ 8, because it's familiar and it's going to last for quite a few years to come.

SouthPalito
This "review" reads like it's just sad trolling for clicks.
Did Apple ever promise the SE would be a revolutionary product? NO. So why are some people acting as if it's some disappointment?
Score: 53 Votes (Like | Disagree)

Jack Burton
Have a younger sibling with a lower budget. Got her to wait on upgrading her crappy android and get this instead. She couldn’t be happier.
Score: 45 Votes (Like | Disagree)

Albright
Well, the headline successfully clickbaited me, so good job on that I suppose.

I upgraded from an SE 1 on launch day. So far I've been pretty happy with it. I haven't really noticed the difference 5G makes since I rarely do network-intensive things on my phone anyway (so the sub-millimeter whatchamawhosit would have been lost on me anyway) but I do notice the improved battery life and the larger screen, which I'm still trying to get used to when typing - all the keyboard keys are in slightly different places. (I thought the new SE would be much closer in size to my previous one, so as someone who prefers smaller phones the leap in size to Apple's new "smallest" phone was a surprise). I also notice the increased memory and speed, as apps don't need to restart as much when switching between them and things such as switching keyboards which would cause a noticeable hiccup on the old SE no longer do on the new one.

Maybe it's Apple's most lackluster phone, but it's good enough for me. I suppose what that says about me can be up for discussion.
Score: 33 Votes (Like | Disagree)

TheYayAreaLiving ?
It makes no sense why Apple iPhone SE 2022 still is too expensive. This should have been a budgeted iPhone yet Apple is still asking for almost $500 with taxes included.
Score: 32 Votes (Like | Disagree)

Tell us what you REALLY think!
Score: 24 Votes (Like | Disagree)

As the author stated, it's isn't for everyone. Many people don't care about having the latest and greatest. My wife is one who likes smaller phones, doesn't care about colors or bezel thickness. Just want's to pay as littlie as possible for a small device that is reliable and pocketable.

It does fulfill the need for many people, despite it's 'lacklusterness' :rolleyes:
Score: 23 Votes (Like | Disagree)
Read All Comments

Monday April 4, 2022 12:36 pm PDT by Juli Clover
Apple in March came out with the updated 2022 iPhone SE, a budget iPhone that's equipped with 5G. Samsung also recently came out with its own budget 5G smartphone, the Galaxy A53 5G, so we thought we'd compare the two to see how they measure up. In short, the A53 5G is offering up a better feature set, but it can't match the iPhone SE in terms of lifespan and build quality. Subscribe to the ...
Read Full Article • 274 comments

Monday May 23, 2022 7:05 am PDT by Hartley Charlton
The iPhone 14 will feature a more expensive "high-end" front-facing camera with autofocus, partly made in South Korea for the first time, ET News reports. Apple reportedly ousted a Chinese candidate to choose LG Innotek, a South Korean company, to supply the iPhone 14's front-facing camera alongside Japan's Sharp. The company is said to have originally planned to switch to LG for the iPhone...
Read Full Article • 99 comments