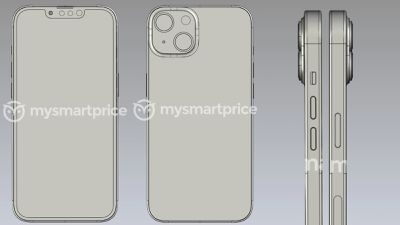 The renders, shared by MySmartPrice, obtained through an "industry insider," depict a very similar design for the assumed two lower-end models of the ‌iPhone 14‌ lineup compared to the ‌iPhone 13‌.

Apple made small design changes to the ‌iPhone 13‌ compared to the iPhone 12, with the main change being a new camera layout. The updated diagonal camera layout from the ‌iPhone 13‌ will carry over to the ‌iPhone 14‌ with no changes, according to the CAD files. MySmartPrice notes, however, that the camera on the back seems to "have received a minor refresh and seems to have a thicker frame of glass surrounding the housing."

Regarding the notch, Apple did make it smaller by shrinking it in size but increasing it in height on the ‌iPhone 13‌ compared to the ‌iPhone 12‌. Apple is planning to stick with the same notch on the base ‌iPhone 14‌ models, according to the renders, which show no noticeable difference in size or design.

For the first time on its flagship iPhone since the introduction of the ‌iPhone‌ X in 2017, Apple is planning to do away with the notch on the high-end ‌iPhone 14‌ models. While the display will not be completely free of intrusions as some customers may hope, it will feature a pill-shaped and circular cutout at the top of the display that takes up less space than a notch.

‌iPhone 14 Pro‌ display layout
Rumors and leaks point to Apple wanting to further differentiate its "Pro" iPhones from its lower-end models. Today's renders for the ‌iPhone 14‌ reveal very few design changes compared to the ‌iPhone 13‌. In addition, the iPhone 14 may even feature the same A15 Bionic chip from the iPhone 13. As with every year, Apple can be expected to improve the cameras on this year's new ‌iPhone‌, so it remains to be seen what exactly Apple plans to change with the ‌iPhone 14‌ compared to the current base model iPhones.

For a rundown of everything we know about the ‌iPhone 14‌ lineup, see our roundup.

DeLaSoul
Put in the M1 chip, let it boot MacOS, give it a thunderbolt port and call it the new Mac Mini
Score: 15 Votes (Like | Disagree)

James Godfrey
So same chip, same design, same screen, same button layout… just a slightly tweaked camera module… seems like a bit of a pointless release IMO… Apple must be really hoping that the lower end Max size is going to sell enough to warrant even releasing the base iPhone 14 line up.
Score: 10 Votes (Like | Disagree)

Can't wait to hear how Timmy & Co are going to spin this one to make people want to upgrade,

I’m not so sure about that Stu. It doesn’t seem to me Timmy needs any help ‘spinning’ anything. I mean, if you paid attention to the quarterly reports, [especially during the last two years of a global pandemic], seems Timmy Cook and Company are exceedingly doing very well as a whole. It’s possible maybe that you missed those reports. But I’ll let it slide.:D
Score: 9 Votes (Like | Disagree)

This is 100% what I expect the new iPhone's to look like this year, no way will it be the pill shape. I even said that in Feb.

This is the cad for the standard iPhone not the iPhone Pro line up which is looking extremely likely it’s getting the ? ⭕️ notch design
Score: 8 Votes (Like | Disagree)

heystu
Can't wait to hear how Timmy & Co are going to spin this one to make people want to upgrade, pretty much yawnsville if the rumors are to believed ?
Score: 6 Votes (Like | Disagree)
Read All Comments