India-based tech blog 91Mobiles posted a series of renders on Wednesday that it claims are based on leaked factory CAD images of Apple's upcoming iPhone 14 Pro. 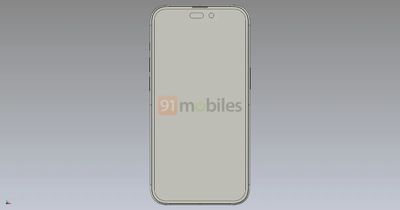 Apple is widely expected to remove the notch on the Pro models in the iPhone 14 series, and the images offer an idea of how Apple's flagship device will look with hole-punch and pill-shaped cutouts near the top of the display.

Converging rumors and leaks have indicated that in the absence of a notch, a hole will be used for the Face ID dot projector, while the pill-shaped cutout will supposedly house the front camera and Face ID infrared camera. The CAD images show that the speaker grille will remain embedded in the top bezel.

Contrary to one rumor, the rear of the device looks largely unchanged from the iPhone 13 Pro, with the triple-lens array housed in a camera bump that protrudes from the chassis. In September, YouTube leaker Jon Prosser claimed the iPhone 14 will have a thicker chassis allowing for no camera bump, with the lenses, LED flash, and LiDAR Scanner sitting flush with the rear glass, but that is not what is shown here.

Prosser's sources also claimed that the new models will have round volume buttons and redesigned speaker and microphone grilles, but again, these latest CAD renders only show the same oblong buttons and grilles that iPhone users will already be familiar with.

Apple is expected to release four iPhone 14 series models this year, consisting of two 6.1-inch and two 6.7-inch sizes, thus dropping the "mini" variant that we saw in the iPhone 12 and iPhone 13 series. The hole-punch and pill-shaped cutouts are only expected to be featured on the highest-end ‌iPhone 14‌ variants, while the two lower-end ‌iPhone 14‌ models will continue to feature a notch.

It has also been claimed Apple will seek to differentiate Pro and non-Pro further this year, in that only the Pro models will get a new A16 Bionic processor, whereas the non-Pro models will feature the same A15 processor found in the iPhone 13 series.

The latter rumor is particularly intriguing, especially coming from reputable analyst Ming-Chi Kuo. The last time Apple re-used a previous-generation processor in a new flagship iPhone model, you have to go back to the original iPhone and the iPhone 3G, both of which used identical 412MHz ARM 11 chips. For everything we know about the ‌iPhone 14‌, see our comprehensive roundup.

AndiG
I think Apple will create the best hole ever. An awesome hole, never have you seen such a hole before and it will totally change the way we use our iPhones.
Score: 45 Votes (Like | Disagree)

fwmireault
Can’t believe I’d say this one day but the notch looks better. Keep it or shrink it until you can hide it completely. At least, there should be only one long pill shape instead of pill+hole
Score: 39 Votes (Like | Disagree)

UltimateSyn
This looks so incredibly bad.
Score: 31 Votes (Like | Disagree)

MajorAbomb
I feel having a pill and circle shapes will be just as distracting as the notch unless they can make some part of it underscreen rather than black holes. Also can we just move to USB-C so I only need 1 cable to charge everything please.
Score: 22 Votes (Like | Disagree)
Read All Comments