Apple plans to launch a "Pro" version of its new Studio Display in June of this year that measures 27-inches and has mini-LED and ProMotion, according to well-respected display analyst Ross Young. 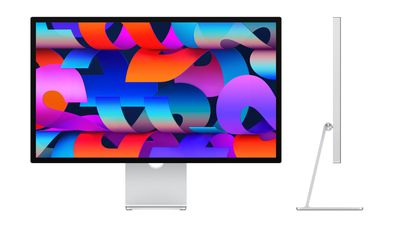 In a tweet, Young says he's still expecting Apple to release a 27-inch mini-LED display in June and has confirmed such plans with sources within Apple's supply chain. Young had previously said that an iMac Pro would launch as early as summer 2022 but no longer believes that to be the case.

Young explains his sources weren't aware of the separation between the iMac, Mac Studio, and Studio Display, adding confusion to Apple's exact plans.

The confusion likely came from the fact that the Studio Display, and presumably the Studio Display Pro, both feature a webcam and a built-in Apple silicon, making it look like an ‌iMac‌ when it's not. Now, it seems that earlier rumors about an ‌iMac‌ Pro launching in June weren't referencing an actual ‌iMac‌, but instead a Pro version of the Studio Display.

Today's "Studio Display Pro" rumor also adds more clarity to information shared by Apple analyst Ming-Chi Kuo, who this week said that an "iMac Pro" would not launch until 2023. On the flip side, Kuo said today in a tweet that Apple may not release any mini-LED devices this year due to cost concerns, so it remains to be seen what exactly Apple has planned for June, around WWDC.

During its event this week, Apple teased an Apple silicon Mac Pro, hinting it may not be that far away. Specifically, when talking about the transition to Apple silicon across the Mac lineup, Apple's senior vice president of Hardware Engineering, John Ternus, said that there's "just one more product to go: ‌Mac Pro‌," before adding "that's for another day."

Adding further to the confusion of Apple's plan, Apple this week discontinued the 27-inch Intel-based iMac, leaving questions on whether there will be a larger ‌iMac‌ to join the 24-inch in Apple's lineup. Currently, it seems customers wanting a large all-in-one desktop computer from Apple will have to wait it out or purchase the 27-inch Studio Display and pair it with a Mac.

Caliber26
This would be hilarious since it would piss off so many people who just bought the new display. There’s no way it will come so soon.
Score: 31 Votes (Like | Disagree)

JamonBull
This would be a weird move. There are a lot of seriously professional customers who would have now bought a Mac Studio with Studio Display that would have wanted mini-LED and ProMotion.
Score: 22 Votes (Like | Disagree)

Mr. 123
If they were planning a Pro, they should definitively have priced the standard model a bit lower. In Sweden the Studio Display is very close to the actual Mac Studio computer which is crazy, especially coming from an iMac 27.
Score: 18 Votes (Like | Disagree)

MayaUser
So this will come along side with Mac Pro at WWDC
Score: 16 Votes (Like | Disagree)

zack123
How would they include ProMotion? Thunderbolt 4 has only Displayport 1.4, thats not enough bandwidth for a 5k 120Hz display, you'd need Displayport 2.0. And that would need a new Thunderbolt version.
Score: 16 Votes (Like | Disagree)

nikaru
An even more expensive monitor....exactly what everyone expect and want from Apple.
Score: 15 Votes (Like | Disagree)
Read All Comments