Nothing, the brand from OnePlus founder Carl Pei, has announced that its Ear (1) true wireless earbuds now include Siri support, putting them on a more equal footing when compared to Apple's rival AirPods Pro. 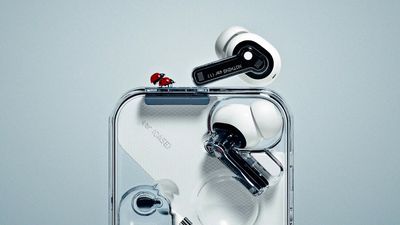 The $99 Ear (1) feature an in-ear design, Active Noise Cancelation, transparency mode, and a charging case with Qi-compatible wireless charging and a USB-C port, although Fast pairing is supported on Android devices only.

The Ear (1) earbuds cost $150 less than Apple's ‌‌AirPods Pro‌‌, but offer many of the same features, such as the premium design, ANC, transparency mode, IPX4 water resistance, and 24 hours of battery life with the charging case. Now they offer ‌Siri‌ support, too.

Some features, like Bluetooth 5.2, three microphones per earbud, and earbud weight, are actually better on paper than ‌‌AirPods Pro‌‌, but they still lack Apple-specific features such as auto-pairing with the H1 chip.

Alexa, play "Nothing Else Matters" Yeah, it's time to say hey to Google and Siri. Voice Assistance is now available for your ear (1). — Nothing (@nothing) February 7, 2022

Released in July 2021 with much marketing hype, the Ear (1) earbuds have seen impressive sales of over 400,000 units since launch. Available in black or white, they are the first Nothing product, and Nothing founder Pei has previously said that the company plans to launch a connected ecosystem of new devices that will extend far beyond the true wireless earphones.
Related Roundup: AirPods Pro
Tag: Nothing
Buyer's Guide: AirPods Pro (Buy Now)
Related Forum: AirPods
[ 56 comments ]

What’s that lady bug doing to the other?! :oops:

MVMNT
Just going to draw focus a little more to the real matter at hand here...

contacos
actually not a bad deal. Especially since Auto pairing is more miss than hit for me anyway
Score: 7 Votes (Like | Disagree)

smythey
Ive had a pair of these since they launched in the UK a few months ago and am very impressed. Can recommend.

With the limited lifespan of these type of earphones, paying Airpod money is too rich for my blood.

Forgive me, I'm being honest here, but I thought that's what "true wireless" meant... no wires. I never took it to mean lossless. I thought it meant that there was no wire connecting the buds, as older bluetooth earphones used to commonly have.

That's exactly what "true wireless" means. It's literally in the name.

It has nothing to do with lossless audio.

Corded = self explanatory
Wireless = no wire connecting earbuds to device but can have a wire connecting each earbud (like Beats Flex ('https://www.apple.com/shop/product/MYMC2LL/A/beats-flex-all-day-wireless-earphones-beats-black'))
True Wireless = AirPods and any earbud that has no wires at all.
Score: 7 Votes (Like | Disagree)

“True wireless” is a marketing joke. It does not mean it plays lossless. All earbuds without wires are ”true wireless”.

Forgive me, I'm being honest here, but I thought that's what "true wireless" meant... no wires. I never took it to mean lossless. I thought it meant that there was no wire connecting the buds, as older bluetooth earphones used to commonly have.
Score: 6 Votes (Like | Disagree)
Read All Comments