Today is January 9, which means it's been 15 years since Apple CEO Steve Jobs stood on stage at the Macworld Expo in San Francisco, California and gave the world its first look at the iPhone, a device that would go on to change everything. 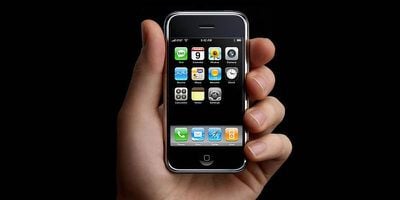 The original ‌iPhone‌ was a tiny little thing with a 3.5-inch LCD display, a plain old Home button, a thick chassis, huge bezels, a Samsung processor, and a 2-megapixel camera, but it was still unlike anything else that was on the market at the time.

Smartphones at the time relied on limited display area, hardware-based keyboards, and styluses for screen interaction, but the ‌iPhone‌ stood apart because it a limited number of physical buttons and instead relied on a multi-touch display, which was more intimate and interactive.

Jobs described the ‌iPhone‌ as three revolutionary products in one: an iPod with touch controls, a phone, and a breakthrough internet communications device. "Today, Apple is going to reinvent the phone," Jobs famously said, and he couldn't have been more right.

Since 2007, Apple has led mobile phone design, dictating the features and capabilities that are must-haves for smartphones and inspiring other manufacturers to follow in its footsteps. Features like Touch ID, Face ID, sleek designs, and incredible camera technology have kept Apple competitive, as have other improvements over the years. Earlier this week, we highlighted 15 changes that Apple has made since introducing the original ‌iPhone‌.

No other smartphone maker has been able to match Apple's deep integration of hardware and software or its unparalleled chip designs, and that's why iPhones continue to be the smartphone of choice for a huge number of people worldwide.

Apple in January 2021 said that there were more than 1 billion active iPhones worldwide, which is a staggering number, and the success of the ‌iPhone‌ has driven Apple to become the world's first company to surpass a $3 trillion valuation.

Every year, Apple manages to make us excited about an iteration on a 15-year-old product. There are promising updates in store for the iPhone 14, including the first notchless design that will see Apple adopting a hole-punch display that will provide more available screen space.

We're also expecting faster performance than ever with the A16, improvements to 5G, and innovative safety features like car crash detection and satellite support for reporting emergencies when cellular signal is unavailable.

Apple is exploring the future beyond the ‌iPhone‌ as well, preparing for the day when the smartphone might be obsolete. The first AR/VR headset is could be unveiled in 2022, and while it will be bulky, expensive, and focused on VR experiences, we can expect Apple to iterate and improve on the headset experience until some kind of head-worn wearable becomes indispensable.

AR/VR headset rendering by Ian Zelbo
We don't know what the ‌iPhone‌ will look like when Apple's 30th ‌iPhone‌ anniversary rolls around, but we at MacRumors will be here to tell you all about it. What do you think Apple has in store for the distant future? Let us know in the comments.
Tags: iPhone Guide, Steve Jobs
Related Forum: iPhone
[ 209 comments ]

a m u n
“An iPod, a phone, and an internet communicator. An iPod, a phone…are you getting it? These are not three separate devices: This is one device, and we are calling it iPhone. Today, Apple is going to reinvent the phone.” — Steve Jobs, January 09, 2007

TheYayAreaLiving ?
15 years ago, Steve Jobs changed the phone industry. Steve's job is one of the reasons why I love the iPhone.

DesertNomad
We exhibited our product (I don't think I am allowed to mention it) at MacWorld in 2007 and had a simple kiosk right across from Apple's booth... about 25 feet away. The traffic to see the iPhone spilled over to our area and though unrelated, the iPhone did more for our small two-person company than I ever imagined possible.
Score: 25 Votes (Like | Disagree)

guzhogi
How many of you weren't even born yet?
Score: 23 Votes (Like | Disagree)

sunapple
I was twelve at the time and I was so excited about this thing that I saved the pictures from the website to my hard drive. It was filed under pictures > iPod > iPhone which made total sense at the time.

Sunday February 5, 2023 6:07 am PST by Joe Rossignol
Apple has discussed selling a new top-of-the-line iPhone alongside the Pro and Pro Max models in 2024 at the earliest, according to Bloomberg's Mark Gurman. Based on this timeframe, the device would be part of the iPhone 16 lineup or later. In a September 2022 edition of his weekly "Power On" newsletter, Gurman said there was "potential" for an iPhone 15 Ultra to replace the iPhone 15 Pro...
Read Full Article • 365 comments