Apple Arcade surpassed 200 games available on the service in August, and new titles continue to be added nearly every week. The latest game coming to Apple Arcade is Disney Melee Mania from Mighty Bear Games, which launches this Friday. 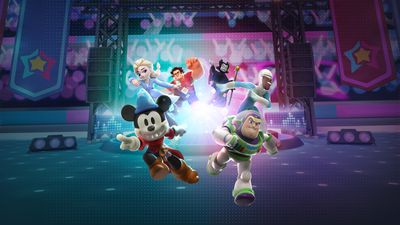 Disney Melee Mania is a battle arena game in which players battle in five-minute 3v3 matches to secure as many points as possible. There are several classic Disney and Pixar characters to choose from, including Wreck-It Ralph, Elsa, Mickey Mouse, Buzz Lightyear, and others. The game will be available on the iPhone, iPad, Mac, and Apple TV.

"We're thrilled to work with Disney to bring these beloved characters to the first-ever Disney and Pixar battle arena game, available exclusively on Apple Arcade," said Simon Davis, Mighty Bear Games CEO. "Fans will compete with arcade-style Disney and Pixar champions in a fun and frenzied all-out brawl to survive the chaotic melee and stay in the spotlight."

Another game coming soon to Apple Arcade is Nickelodeon Extreme Tennis, featuring iconic Nickelodeon characters, including SpongeBob SquarePants, Angelica, Rocko, Garfield, and others. A multiplayer mode pits players against each other against Nickelodeon-themed backdrops like Bikini Bottom, and there is also a single-player story mode where players are tasked with advancing through unique challenges for each character.

Nickelodeon Extreme Tennis will be available on the iPhone, iPad, Mac, and Apple TV. No specific release date has been shared yet for the game, but Apple Arcade subscribers can sign up to be notified when the game becomes available by tapping on the "Notify Me" button in the game's listing on the App Store.

Apple Arcade is a subscription-based gaming service accessible through the App Store. Priced at $4.99 per month or $49.99 per year, the service provides subscribers with access to a growing catalog of games across the iPhone, iPad, Mac, and Apple TV. All games on Apple Arcade are free of ads and in-app purchases.

To what game do you refer, and how does this change that game?
Score: 4 Votes (Like | Disagree)

nvmls
The heck are those teeth?! Mickey high?
Score: 3 Votes (Like | Disagree)

My god, it's even worse when you correct the head tilt...
Score: 3 Votes (Like | Disagree)

BeefCake 15
Doing the trial for few months, they're not bad games at all but playing them on the new ATV is much smoother than the last gen.
Score: 2 Votes (Like | Disagree)
Read All Comments