New detailed CT scan images of the first-generation AirPods, AirPods Pro, and third-generation AirPods have revealed in detail what internal design changes Apple had to accomplish to include new features in every generation while continuing to miniaturize internal components. 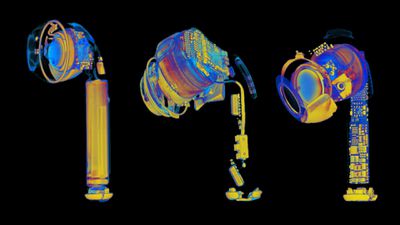 The first-generation AirPods, announced in 2016, serve as the main design inspiration for the ‌AirPods Pro‌ and third-generation AirPods. The CT scan shows that the internal battery is the largest component in the first-gen AirPods, taking up the entire space of the long stem. In the earpiece, Apple's H1 chip finds its home and, at the bottom, a single downfacing microphone.

With the ‌AirPods Pro‌, Apple's first update to the AirPods since their launch, the company had to completely rethink the internal structure and placement of components. Perhaps the most striking and noticeable change highlighted by the scans is the location of the battery.

The ‌AirPods Pro‌ nixed the long-stem design from the AirPods and Apple's classical EarBuds. Instead, Apple cut the stem to make the entire body shorter, meaning fitting a battery to provide sufficient charge into the smaller stem proved a challenge.

CT scan images by Scan of the Month
To counter this, Apple placed the battery in the head of the ‌AirPods Pro‌. In the head, which grew in size compared to the first-gen AirPods, Apple also miniaturized different components into a single PCB, or printed circuit board, to allow for a smaller footprint. The ‌AirPods Pro‌ also included Adaptive EQ, which was enabled thanks to a third, new microphone placed in the head of ‌AirPods Pro‌ in front of the speaker.

In the stem, Apple also repositioned the microphones compared to the initial AirPods, now placing them higher and not directly coming out of the bottom of the stem. The removal of the battery from the stem of ‌AirPods Pro‌ allowed Apple to include force touch sensors, allowing users to squeeze the ‌AirPods Pro‌ to pause music, invoke Siri, and more.

Moving forward, Apple is expected to adopt an entirely new approach with the next-generation ‌AirPods Pro‌, which will dispense with a stem altogether. The design and engineering lessons Apple has learned thus far with AirPods, such as being able to fit the battery in the head of the AirPods instead of the stem, are likely to come into greater play with the new ‌AirPods Pro‌ destined for launch in 2022.

The CT scan images were provided by "Scan of the Month," a website that takes popular products and puts them under a CT scan to uncover how they're designed and built. This month's AirPods website is a fun and interactive experience for those interested and can be found here.

44267547
The CT Scan is really fascinating look into how much technology is in such a small, compact device. You have to give these engineers the necessary credit who make these devices possible to live in a wireless world for our convenience.

I wear these almost every day in the gym, and probably is my second favorite Apple device, next to the Apple Watch.
Score: 9 Votes (Like | Disagree)

DMG35
I know they aren't a great fit for everyone, but for me the new Airpods are the absolute best Airpods I've ever worn from a fit and sound standpoint.
Score: 7 Votes (Like | Disagree)

If they fit you’ll absolutely love them.
Score: 5 Votes (Like | Disagree)

There is less than 20$ worth of parts in air pods.

Even if it costs them 0$, they'll still be priced the same, because that's how business works.
Score: 4 Votes (Like | Disagree)

I know they aren't a great fit for everyone, but for me the new Airpods are the absolute best Airpods I've ever worn from a fit and sound standpoint.

There is less than 20$ worth of parts in air pods.

So the work of all the engineers and everyone involved in this is not worth a single cent?

Friday November 12, 2021 2:21 am PST by Tim Hardwick
Apple will release second-generation AirPods Pro in the third quarter of 2022, according to a new rumor allegedly based on supply chain sources. AirPods Pro 2 mockup based on rumors Apple is developing second-generation AirPods Pro to follow the AirPods 3, with the new high-end earbuds set to come out in 2022, according to well-connected Bloomberg reporter Mark Gurman and respected Apple...
Read Full Article • 51 comments