Apple today announced that Apple Fitness+ will feature the UK's Prince William on Time to Walk and Apple Music 1 on December 6. 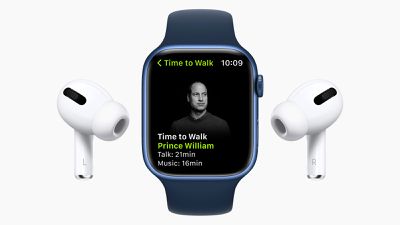 Prince William will close the second season of Time to Walk with a holiday special episode. During the episode, Prince William discusses the importance of keeping mentally fit, going outside of your comfort zone, and the value of listening.

Time to Walk is a selection of Apple Fitness+ audio experiences on the Apple Watch that feature influential people as they share personal stories and memories, photos, and music to explore thoughts on purpose and gratitude, levity, and thought-provoking topics. Each episode is recorded while the guest walks outside or in locations that are meaningful to them.

Apple added that it is making donations to three charities around the world chosen by Prince William that focus on mental health: Crisis Text Line in the U.S., Shout 85258 in the UK, and Lifeline in Australia. These charity provide free, confidential crisis support.

Prince William's holiday special episode will be released on December 6, available to Apple Fitness+ subscribers on demand in the Fitness app on the Apple Watch, and, in a first for Time to Walk, it will also be streamed three times on ‌Apple Music‌ 1.

Marbles1
Relax whilst you listen to a (literally) entitled multi-millionaire tell you about the importance of taking time for yourself.
Score: 27 Votes (Like | Disagree)

dmw7
He’s still desperate to be relevant, then?
Tragic.
Score: 19 Votes (Like | Disagree)

yaxomoxay
Thanks for the reminder I have to remove this feature.
Score: 16 Votes (Like | Disagree)

Born2Run
Thats a good reason not to use it then!
I can't stand that dumbass Royal family!
Score: 15 Votes (Like | Disagree)

kurtster
I wish the rich and entitled would stay away from mental health causes, however well intentioned. There are better, more qualified and simply more credible people who can fulfill that role.
Score: 14 Votes (Like | Disagree)
Read All Comments