With Apple's latest high-end MacBook Pro being such a radical departure from the previous model, some users are now looking to the next-generation MacBook Air and what similar changes could be brought over to the company's smallest and lightest laptop. 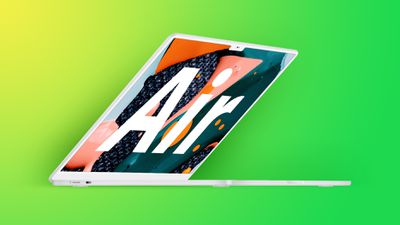 Rumors already abound about the next-generation MacBook Air, providing a number of insights into Apple's plans for the new ultra-portable laptop, and with previous ‌MacBook Air‌ models mirroring many of the new features of the MacBook Pro, the company's new high-end machines seems to be the best place to look for what to expect.

With the MacBook Pro receiving a radical redesign this year, it is not difficult to imagine the ‌MacBook Air‌ getting a thinner version of this design, with rounded edges on the bottom and squared-off edges on the top.

This is supported by a rumor from "Ty98," the same leaker who was first to disclose the notch on the new 14-inch and 16-inch MacBook Pros, who said the next ‌MacBook Air‌ will "look much better" because Apple will eliminate the current wedge design that has been synonymous with the company's thinnest notebook since October 2010, when the tapered unibody chassis was introduced.

Tapered design of current ‌MacBook Air‌
The tapered design transitions from thicker at the back to thinner at the front, whereas the new, more uniform design will be not only "light" but "very round," according to the Chinese leaker.

Apple has also adopted an all-black well for the MacBook Pro's keyboard, it seems reasonable to expect an all-white variation for the ‌MacBook Air‌ since the device is expected to get white bezels around the display like the 24-inch iMac, which also features a white keyboard. This has been supported by the leaker known as "Dylandkt," who said that the ‌MacBook Air‌ will have full-size function keys and a white keyboard.

Both the new 14-inch and 16-inch MacBook Pro feature mini-LED-based Liquid Retina XDR displays and there is good reason to expect a variation of this in the ‌MacBook Air‌. According to analyst Ming-Chi Kuo, the ‌‌MacBook Air‌‌ will feature a mini-LED display, a prediction also echoed by DigiTimes.

Several reports have suggested that MacBooks will be the main driver of mini-LED panel shipments going forward as Apple transitions to the technology across all of its display-based products.

The next-generation ‌MacBook Air‌ will feature a notch in the display housing, according to Ty98, just like the latest MacBook Pro. This detail was mentioned in the same highly accurate forum post about the new MacBook Pro from August 19.

The likelihood is that, similar to the MacBook Pro, there will be no Face ID in the next ‌MacBook Air‌, as the notch will house only the camera and ambient light sensor plus an indicator light.

‌Ming-Chi Kuo‌ was first to report that the MagSafe charging connector would return to Apple's MacBooks in future designs, and the MacBook Pro recently reintroduced ‌MagSafe‌ charging with ‌MagSafe‌ 3, enabling faster charging and easy magnetic connection and disconnection.

Kuo's prediction implied that multiple future MacBooks would be getting ‌MagSafe‌, and Gurman has since claimed ‌MagSafe‌ is also coming to the MacBook Air. Gurman's report clarified that ‌MagSafe‌ will be offered on the new 13-inch ‌‌MacBook Air‌‌ model in addition to a pair of Thunderbolt/USB4 ports for connecting external devices.

For more on the next-generation ‌MacBook Air‌, see our detailed rumor guide.