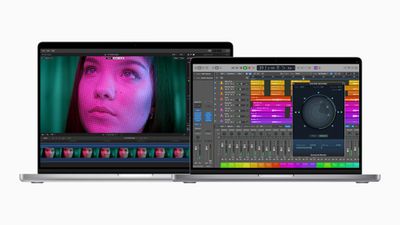 Using the latest Final Cut Pro 10.6 update and the ‌M1 Pro‌ and ‌M1 Max‌, video editors can now play up to seven streams of 8K ProRes or color grade 8K HDR video at full resolution, and export ProRes video over five times faster than before.

The latest Final Cut Pro also includes a new Object Tracker that uses machine learning to automatically detect faces and objects, and match their movement to create cinema-quality titles and effects on any Mac. Object tracking analysis is up to 5x faster on the new 16-inch MacBook Pro, and takes advantage of the Neural Engine's machine learning capabilities to accelerate the detection of faces and objects in video.

On the new MacBook Pro, Compressor can transcode HEVC video up to twice as fast and transcode ProRes video up to 10 times faster. Compressor can also transcode Canon Cinema RAW Light video files to other professional formats like ProRes and H.264 for the first time, and Watch Folders can automatically encode content placed in a selected folder in the file system.

Logic Pro, Apple's pro music creation software, now comes with a full set of tools for authoring spatial audio music, allowing users to to mix and export songs in Dolby Atmos for Apple Music. Musicians can also use up to three times as many plug-ins for recording on the all-new MacBook Pro with ‌M1 Max‌.

Logic Pro now also comes with all the new Producer Packs introduced in GarageBand this summer. Musicians can use beats, loops, and samples created by the likes of Boys Noize, Mark Lettieri, Mark Ronson, Oak Felder, Soulection, Take A Daytrip, Tom Misch, and TRAKGIRL. Logic users also now have royalty-free access to 2,800 new loops, 50 new kits, and 120 new patches they can use in their own songs.

"The world's most creative people use Final Cut Pro, Logic Pro, and the Mac to make the memorable movies, TV shows, online videos, songs, and soundtracks that we all enjoy," said Bob Borchers, Apple's vice president of Worldwide Product Marketing. "With the combination of powerful new features in Final Cut Pro and Logic Pro, and the unprecedented performance from the MacBook Pro powered by the all-new M1 Pro and M1 Max, pros will be able to push the limits of their creativity like never before."

Apple has also released updates for its iMovie app for the Mac and its Logic Remote app for the iPhone and iPad.

dorsal
Seems like they could use Siri voice to text technology to (easily?) add Auto Captioning in FCPX. That would save me a lot of time.
Score: 4 Votes (Like | Disagree)

Seems like they could use Siri voice to text technology to add Auto Captioning in FCPX. That would save me a lot of time.

This -- and a lot of other features -- are much needed. ie: Creating text in FCPx is such a hassle.
Score: 1 Votes (Like | Disagree)

asiga
They made them notch-ready!!
Score: 1 Votes (Like | Disagree)
Read All Comments

Monday October 18, 2021 2:43 pm PDT by Joe Rossignol
Alongside updates to Final Cut Pro and Logic Pro, Apple today updated its iMovie app for Mac with optimizations that take full advantage of the power and performance of the M1 Pro and M1 Max chips in the new 14-inch and 16-inch MacBook Pro models. On macOS Monterey, the new version of iMovie can also be used to edit Cinematic mode videos recorded with an iPhone 13. The full release notes:C...
Read Full Article • 14 comments

Wednesday January 19, 2022 11:30 am PST by Dan Barbera
It's now been a few months since the M1 Pro and M1 Max MacBook Pro models launched in October, and MacRumors video editor Dan Barbera has been using one of the new machines since they debuted. Over on the MacRumors YouTube channel, Dan has shared a three month review of his MacBook Pro to see how it has held up over time and how it's changed his workflow. Subscribe to the MacRumors YouTube ...
Read Full Article • 202 comments