Apple today revealed a new subscription tier for Apple Music, called the "Voice Plan" and priced at $4.99/month. This plan has been designed around the power of Siri and offers subscribers access to the service's catalog of 90 million songs only through ‌Siri‌, hence the name. 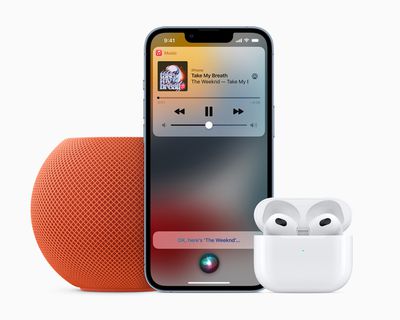 This means that users on this tier can only access and play songs, playlists, and albums in ‌Apple Music‌ through their voice on devices like iPhone, iPad, AirPods, and HomePod mini. Users will be able to subscribe to the Voice Plan by saying "Hey ‌Siri‌, start my ‌Apple Music‌ Voice trial, or by using the ‌Apple Music‌ app. The trial lasts seven days.

This plan is available for one person, similar to the regular $9.99/month Individual Plan, but essentially lacking all of the regular app-based UI in the ‌Apple Music‌ app. Apple says that users will still have full playback control including unlimited song-skipping through ‌Siri‌.

Instead of the regular Music app UI, Voice Plan users will get a "customized in-app experience" with suggestions based on their music preferences and a queue of music that was recently played through ‌Siri‌. There will also be a section called "Just Ask ‌Siri‌" where subscribers can learn tips to optimize the voice assistant.

‌Apple Music‌ is also adding hundreds of new mood and activity playlists, which were created by ‌Apple Music‌'s editorial team and are optimized for the Voice Plan. Some examples Apple gave are asking ‌Siri‌ to "Play the dinner party playlist," "Play something chill," or "Play more like this."

These new playlists will be available to all subscribers on any ‌Apple Music‌ plan. Those on the Voice Plan will also still have access to ‌Apple Music‌'s entire lineup of playlists, like New Music Daily, Today's Hits, Today's Country, A-List Pop, and more.

Smithwicks
So a $5 discount to deal with the frustration that is Siri? Not sure that’s enough.
Score: 54 Votes (Like | Disagree)

Souponastick270
Who actually wants this ?
Score: 40 Votes (Like | Disagree)

theecksman
I’m just a lurker on these forums but had to come and comment because Jesus you guys are special. The VOICE plan similar to amazons tiered plan for people who only use Alexa devices. It’s cheaper because it’s a plan I can guarantee is geared towards home pod customers. NOT on the go iPhone music customers. It’s 5 dollars to have your voice activated devices play music at home. People will pay for it.
Score: 36 Votes (Like | Disagree)

Who actually wants this ?

I'm not sure what is meant by voice here. It's already possible to ask Siri to play music, or is this different ?

The way I am understanding it, is the voice plan ONLY has Siri, no UI.

Monday January 3, 2022 5:28 am PST by Tim Hardwick
Siri appears to have lost the ability to carry out requests to rate songs played in the Apple Music app in iOS 15 and later, based on user reports and tests conducted by MacRumors. When listening to a song from your music library on iPhone and iPad, it used to be possible to ask Siri to "rate this song five [or whatever number] stars," and the virtual assistant would do so without fuss....
Read Full Article • 76 comments