Google is winding down its Material Design custom UI for iOS apps to switch to pure UIKit, according to Google's design chief for Apple platforms Jeff Verkoeyen. 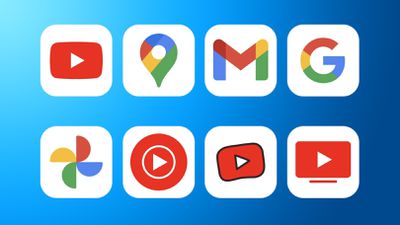 Google's suite of apps for iOS and iPadOS, including Gmail, Google Maps, Google Photos, Google Drive, and YouTube, have used custom user interfaces that mirror the experience on Android for almost a decade. The purpose of these Material Design guidelines was to unify software design as much as possible across desktop, mobile, and the web for a consistent experience.

In a recent Twitter thread, Jeff Verkoeyen explained that going forward, Google will switch to using the design of UIKit, Apple's framework for building interfaces in iPhone and iPad apps. Verkoeyen said that previously UIKit was not viable due to "gaps" in its design language, but a side effect of this was "drifting further and further from Apple platform fundamentals because those fundaments were also evolving year over year." The issue has also been complained about by some users who have felt that using Google's iOS apps offers a jarring and inconsistent experience with the rest of the OS.

With iOS 14 onwards, Google believes that UIKit's design has sufficiently improved to use it widely in its iOS and iPadOS apps. Since the start of 2021, Google's design team for Apple platforms "began a deep evaluation of what it means to build a hallmark Google experience on Apple platforms by critically evaluating the space of "utility" vs key brand moments, and the components needed to achieve either."

Users can expect to see far fewer custom components in Google apps, with elements such as switches, bars, controls, lists, and menus changing to Apple's system designs. The result should be Google iOS and iPadOS apps that look and feel much more native.

There will still be some of "the highlights of Google's design language," but married to "the best of UIKit." The "new direction" will "really make products feel great on Apple platforms," Verkoeyen commented. Google is also currently hiring designers for its Apple development team amid the change.

orbital~debris
I seriously hope this change of tack means Google will re-write their YouTube app for tvOS and make it work like Apple's TV app.
Score: 50 Votes (Like | Disagree)

anshuvorty
I guess Google's designers just got tired of supporting non-native interfaces using Apple's dev tools and decided that it is just easier to develop and support UI's that are native to the dev tools and the OS...WHO KNEW?!?!??!
Score: 30 Votes (Like | Disagree)

Meanwhile Apple doesn’t appear on other platforms. If they would, their software would be 100% Apple styled and just as out of place. Just look at the last living attempt: iTunes on Windows.

With iOS 14 onwards, Google believes that UIKit has sufficiently improved to use it widely in its iOS and iPadOS apps

Says the student to the teacher..
Score: 20 Votes (Like | Disagree)

827538
I’ve removed Google from my life but I’m glad to see this is happening. Google’s UI always felt off on iOS. I’m really not much of a fan of anything Google does.
Score: 17 Votes (Like | Disagree)

Orange Bat
I’ve develop on both iOS and Android, and I never understood Google’s desire to make iOS look like Google/Android apps. That’s not how good UI works. You should make the app fit the system, not adjust the system to your app. It instantly makes dedicated users of iOS more confused because your app doesn’t work like other iOS apps.

Also, I bet the Google iOS developers have been pushing this for a long, long time. UIKit will make it much easier to develop and design apps and app updates. While creating your own design on iOS isn’t difficult, UIKit simplifies it nearly 10 fold.

(But no SwiftUI love? With iOS 15 it’s matured enough to finally begin a switch over.)
Score: 13 Votes (Like | Disagree)
Read All Comments

Sunday February 5, 2023 6:07 am PST by Joe Rossignol
Apple has discussed selling a new top-of-the-line iPhone alongside the Pro and Pro Max models in 2024 at the earliest, according to Bloomberg's Mark Gurman. Based on this timeframe, the device would be part of the iPhone 16 lineup or later. In a September 2022 edition of his weekly "Power On" newsletter, Gurman said there was "potential" for an iPhone 15 Ultra to replace the iPhone 15 Pro...
Read Full Article • 447 comments