The flurry of activity following Apple's event and the launches of iOS 15 and the iPhone 13 has started to calm down, but that doesn't mean there hasn't continued to be a ton of news out there. 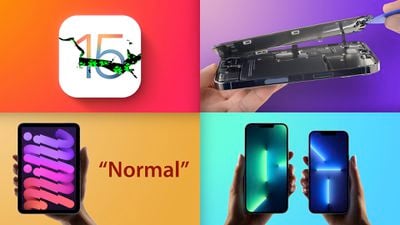 With almost two weeks out in the public, iOS 15 has proven to include a number of bugs, so some users may want to hold off on updating if they haven't already. Apple has already pushed out one bug fix update, and a more significant update is currently in beta testing.

Other news this week included teardowns of the iPhone 13 and new iPad mini, as well some rumors about the next MacBook Air, so read on for details on all of these stories and more!

iOS 15 was released on September 20, and in the time since, early adopters have experienced a handful of bugs. For example, there was an issue preventing some iPhone 13 users from using the Unlock with Apple Watch feature, which Apple has now fixed with Friday's release of iOS 15.0.1.

There's another iOS 15 bug related to iCloud Backups that can result in photos saved from an iMessage conversation that is later deleted to disappear from the Photos app, intermittent touchscreen issues on iPhone 13 models, and even some reported zero-day security vulnerabilities.

The folks at repair website iFixit recently completed a teardown of the iPhone 13 Pro, confirming that Face ID stops functioning on the device if the display is replaced by a third-party repair shop that isn't part of the Apple Authorized Service Provider program — even if the display itself is a genuine Apple part.

It's been a week since all four iPhone 13 models launched in stores, and we continue to learn some new details about the devices.

Despite not being advertised as a feature by Apple, it has been discovered that the iPhone 13 Pro Max is capable of charging at faster speeds than the iPhone 12 Pro Max and even the smaller iPhone 13 Pro when the device is connected to a 30W or higher USB-C power adapter.

Apple already released a MacBook Air with its custom-designed M1 chip in November 2020, but rumors suggest a new model is in the works.

According to Apple analyst Ming-Chi Kuo, a redesigned MacBook Air with a next-generation Apple silicon chip and a mini-LED backlit display will enter mass production in the third quarter of 2022, suggesting that the notebook could be released in the fall of next year.

Some early adopters of the new iPad mini have noticed a subtle "jelly scrolling" effect on the display when using the device in portrait orientation.

Apple told Ars Technica that "jelly scrolling" is normal behavior for LCD screens, but some users have complained that the effect is more noticeable on the new iPad mini compared to other iPads. iFixit provided more details about the matter in its iPad mini teardown.

Following the launch of the iPhone 13, Google has shared a blog post with tips to help users "bring the best of Google" to their new device.

The blog post is quite humorous in that it recommends iPhone 13 users have multiple home screen pages full of almost exclusively Google apps and widgets, such as Gmail, YouTube, Google Photos, and Google Calendar, which essentially mirrors the Android experience.

q64ceo
They're not bugs; they're features.
Score: 4 Votes (Like | Disagree)

I7guy
IOS 15 is a nice step up from IOS 14 in terms of visual appeal and functionality. Liking the changes for ipados.
Score: 2 Votes (Like | Disagree)

unQuestionable
I have a bug where one of my two Siri App Suggestions widgets display “No Suggestions Available.” Senior Advisors don’t even know what’s going on. None of the usual remedies solve this problem, nor 15.0.1. I will wait until 15.1 to see if that fixes it, otherwise will reset my phone completely.
Score: 1 Votes (Like | Disagree)

macguru212
I bought my wife a iphone 13 mini - been a headache at the start: items added to the wallet tend to disappear, particularly the covid vaccination card thingy, and her apple watch lost connectivity to the phone and required 3 resets/setups to finally make it stick.

The worst? we had to physically re-use the old sim card from her old phone because the e-sim activation would not work. Apple blamed ATT, ATT blamed Apple.... been a fun few days. All is good now, thankfully.

I saw the new iPad mini at a store. There is too much space between app icons and the edge of the screen. It is annoying and makes the mini look miniature, not mini. Otherwise it is a nice little device.

Yeah, I noticed that too when I saw the mini 6 on display at Best Buy yesterday. It’s like Apple took the iPhone mini, enlarged the screen to make it bigger than a Pro Max but left the small icons and everything intact. It’s only when you open up the apps that you know you now have a larger screen than a Pro Max or even a Pro. I think you can make the app icons larger to fill up the space. I wanted to try that, but when I played around with the display model, I focused too much on going to different websites and seeing if the jelly scrolling bothered me enough to stop me from buying it so I forgot to do that. Speaking of the “jelly scrolling”, the tilting of the text lines looks weird, but if you scroll slowly, it’s no longer an issue, at least not for me. It was still a little disappointing when I compared it to the “more normal” Air 4 near it. I may still buy the iPad mini 6 by Christmas, but I’m not in a hurry to do so now.
Score: 1 Votes (Like | Disagree)
Read All Comments