Alongside the new iPhone 13 models, Apple introduced an updated version of the MagSafe Wallet that has Find My built in. The new MagSafe Wallet is designed to be easier to find should it slip off of an iPhone or fall out of a pocket, but some new ‌MagSafe‌ Wallet owners are unable to get ‌Find My‌ to connect. 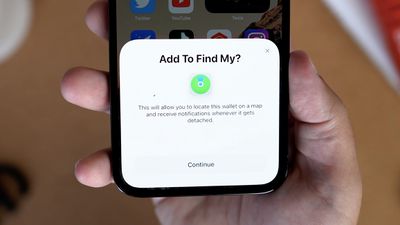 According to a long thread on Reddit, affected users do not get the proper ‌Find My‌ pop up when attaching a ‌MagSafe‌ Wallet to an ‌iPhone‌. The issue seems to be impacting ‌iPhone 13‌ models in particular, but there are also some complaints from iPhone 12 owners.

The ‌MagSafe‌ Wallet is meant to connect to ‌Find My‌ automatically when attached to an ‌iPhone‌, as we demonstrate in our hands-on video below, but it simply does not work for some people.


Some users have been directed by Apple Support to Erase Network Settings and have had success with that method, but others say that this method does not work.

I had 3 calls with customer support and we were able to get it working for my iPhone 13 pro max. This is what worked: they told me to go to Settings > General > Transfer or Reset > Erase > Erase Network Settings. The phone restarted, and after restarting and attaching the wallet to the back of my phone, the animation popped up and wallet is now in my Find My app!

Reddit user EndlessApology was told by Apple Support to take more drastic measures and put his ‌iPhone‌ into Device Firmware Update (DFU) mode to reinstall the OS using a Mac.

Got my own Wallets today and immediately had this issue with both my 13 Pro & Pro Max. Spoken to Apple tech, and followed what they said and it fixed it. Put the phones into DFU mode, and reinstall the OS and Firmware. Set the phone up again without doing any recovery. Once set back up, pop the wallet on and it'll pop up after about 5 seconds, and let you pair to Find My. After that, if you need to, reset the phone on the device itself, and restore from back up in set up. Sorted :)

DFU mode has been largely successful for most of the Reddit users who have attempted to fix the issue, but it is a huge hassle that shouldn't be necessary for a simple accessory pairing process. Based on the Reddit thread, Apple is aware of the issue, so it's possible that a fix will be coming in a future update.

For now, users who want to get their ‌MagSafe‌ Wallets working right away should try the Reset Network Settings option and if that doesn't work, the DFU method to reinstall iOS 15.

HeavenDynamic
This might be the buggiest iOS/iPhone release ever. It was understandable when it was a major update like iOS 7, 8, 11 or 13 but there’s almost nothing new this year.
Score: 35 Votes (Like | Disagree)

macloverHK
Another day, another bug
Score: 30 Votes (Like | Disagree)

zorinlynx
Anyone else think they should stop tying OS releases to new phone releases? If there wasn't such a rush to get the new OS out the door for a new phone release, maybe we wouldn't have so many bugs hitting the production releases of iOS.
Score: 27 Votes (Like | Disagree)

So are these all pandemic bugs? No wonder Tim wants people back in office. ?

xxray
This is hilarious at this point.
Score: 13 Votes (Like | Disagree)

BenLeong
Yikes. Whoever is in charge of iOS over there kind of blew it this time around. Every release will have bugs, but 15 seems to be a train wreck. Glad I haven’t downloaded it.
Score: 13 Votes (Like | Disagree)
Read All Comments

Thursday September 23, 2021 10:28 am PDT by Dan Barbera
Alongside the iPhone 13 models, Apple introduced a new version of the MagSafe Wallet that first came out last year. This updated version includes Find My technology, and we thought we'd test it out to see how well it works and whether it's a useful feature addition. Subscribe to the MacRumors YouTube channel for more videos. Design wise, the new iPhone Leather Wallet with MagSafe looks like...
Read Full Article • 115 comments

Thursday October 14, 2021 8:00 am PDT by Mitchel Broussard
AT&T this week is hosting a sale where you can get 15 percent off a wide selection of Apple's first party accessories, including iPhone 13 cases, the new MagSafe Leather Wallet, and other MagSafe charging accessories. Note: MacRumors is an affiliate partner with some of these vendors. When you click a link and make a purchase, we may receive a small payment, which helps us keep the site...
Read Full Article • 18 comments

Thursday November 11, 2021 6:20 am PST by Mitchel Broussard
At DailySteals today, you can get Apple's MagSafe Duo Charger for $89.99, down from $129.00 by using the code SBDSMSFE at the checkout screen. This is a brand new model of the MagSafe Duo, and DailySteals offers free shipping to shoppers in the United States. Note: MacRumors is an affiliate partner with DailySteals. When you click a link and make a purchase, we may receive a small payment,...
Read Full Article • 22 comments

Wednesday September 29, 2021 6:58 am PDT by Mitchel Broussard
Today at AT&T you can get 15 percent off a wide selection of Apple's MagSafe accessories, including Clear, Silicone, and Leather Cases for the iPhone 13, 13 mini, 13 Pro, and 13 Pro Max. Note: MacRumors is an affiliate partner with some of these vendors. When you click a link and make a purchase, we may receive a small payment, which helps us keep the site running. Sale prices have been...
Read Full Article • 13 comments

Wednesday October 20, 2021 6:56 am PDT by Mitchel Broussard
Verizon's sale from earlier this month remains ongoing as we near the end of October, and it still has the all-around best deals online across Apple's collection of MagSafe accessories. This includes discounts on products like the MagSafe Charger, MagSafe Duo Charger, MagSafe Battery Pack, and a few non-MagSafe accessories. Note: MacRumors is an affiliate partner with Verizon. When you click a ...
Read Full Article • 6 comments

Deals: Verizon Offering Up to 30% Off MagSafe Accessory Bundles, iPhone 13 Cases, and More

Monday September 27, 2021 10:53 am PDT by Mitchel Broussard
Today we're tracking a handful of solid accessory discounts offered by Verizon, offering a chance to save on a new case or screen protector for your iPhone 13, MagSafe bundles, and more. Verizon offers free two day shipping across the board on orders over $49, even if you don't use Verizon as a carrier. Note: MacRumors is an affiliate partner with some of these vendors. When you click a link...
Read Full Article • 10 comments

Deals: Save Up to 30% on Apple's MagSafe Charger Accessories for Your iPhone 12 or iPhone 13

Wednesday September 22, 2021 7:25 am PDT by Mitchel Broussard
A pair of solid deals on Apple's MagSafe Charger and MagSafe Duo Charger are still live at Amazon and Verizon, respectively. We first began tracking these all-time low prices one week ago, and it's a great time to buy them now at these prices, ahead of the iPhone 13 launch on Friday. Note: MacRumors is an affiliate partner with some of these vendors. When you click a link and make a purchase,...
Read Full Article • 17 comments