Several iPhone 13 users have taken to online forums and social media to report that after receiving their brand new iPhones, they're experiencing a bug preventing it from communicating with their Apple Watch, making what's supposed to be a seamless experience an annoyance. 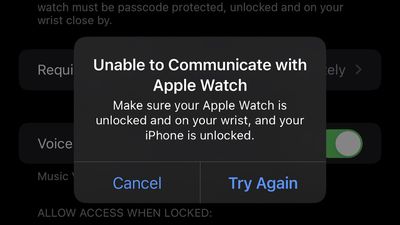 Posts and comments on Reddit suggest that typical problem-solving solutions aren't working, such as restarting both devices and even unpairing and repairing the Apple Watch to the iPhone. Posts on Twitter and Reddit indicate that the issue is widespread amongst new ‌iPhone 13‌ users, but at least so far, we aren't seeing reports of other ‌iPhone‌ models being impacted.

The ‌iPhone 13‌ initially shipped with an outdated build of iOS 15, so customers experiencing the bug should first ensure they're running the latest iOS 15 and watchOS 8 version. Still, even then, reports suggest that does little to amend the issues.

The new bug joins a growing list of bugs related to iOS 15 and the new iPhones, including a bug that may result in Apple Music being inoperative after a restore, a bug that may cause widgets to reset, and a bug impacting reported iPhone and iPad storage.

Apple is currently testing iOS and iPadOS 15.1, but given the growing number of issues experienced by users, the company may decide to release iOS 15.0.1 before its first significant dot update for iOS and iPadOS 15. We've reached out to Apple for comment on the bug, and we'll update this if we hear back.

sniffies
That’s because today is Friday and your iPhone 13 is secretly trying to communicate with the Witch and not the Watch.
Score: 36 Votes (Like | Disagree)

filchermcurr
Poor Apple. :( They're only a small $2 trillion dollar company. They can't be expected to test that things work before releasing them! We expect too much.

Joking aside, before people start screaming at me about the complexity of software, I know. However... I also know that it would be easy enough to have a list of major features, say, one that includes unlocking with the watch or 'using Apple Music'. And to have a small team who is given the list. This team, we could call them something fancy sounding like "Quality Assurance", would then test these features to ensure that they work as expected.

I dunno. Just a crazy thought I had.
Score: 15 Votes (Like | Disagree)

BadMelonFarmer
Ahhhhh, so it’s not just me then.
Score: 9 Votes (Like | Disagree)

SactoGuy18
ANOTHER reason why I won't upgrade to iOS 15 until they get the first bug fix release.
Score: 9 Votes (Like | Disagree)
Read All Comments