Despite a smaller notch, the iPhone 13 lineup will not show users their battery percentage in the status bar, or at least, not by default, according to the ‌iPhone 13‌ simulator embedded within Xcode. 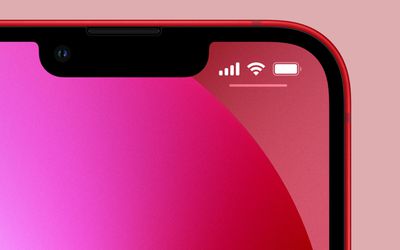 The entire ‌iPhone 13‌ series features a smaller notch, allowing for more area to display content. While many customers may have hoped that a smaller notch would lead Apple to show the battery percentage in the status bar, that doesn't seem to be the case, at least for now.

As noted on Twitter, the Xcode 13 simulator for the iPhone 13 Pro Max shows the status bar without a battery percentage, despite ample room to shift the signal and Wi-Fi bars to the left. While the simulator in the release candidate of Xcode 13, released after yesterday's event, shows no battery percentage, Apple may offer it as an option within Settings.

Apple is unlikely to place the battery percentage in the status bar with no way for users to turn it off. With older iPhones that feature no notch, Apple includes an option within settings to toggle the percentage on or off, and a similar play could be in-store with the ‌iPhone 13‌. Although it's worth noting that none of the ‌iPhone 13‌ or updated iOS 15 marketing images depict that as a possibility.

The ‌iPhone 13‌ and ‌iPhone 13 Pro‌ will begin shipping to customers on Friday, September 24, but we do expect reviews and hands-on impressions of the devices to be released before that. Those reviews and impressions will give us a definitive answer on whether Apple will finally allow customers to show their battery percentage in the status bar, rather than having to drag down on the right corner of the screen.

The_Interloper
That’s okay, the new Always On Display will show your battery percentage below your clock in the centre of the screen. Oh, wait…. ?
Score: 28 Votes (Like | Disagree)

How exactly do those 10% affect you?

? How lazy can one get. You swipe down to see the control center and there is the battery percentage. Takes like one second.

I don’t even care about seeing battery percentage until it goes into power save mode. Then I just swipe down and look in control center when ever I want. One second is all it takes …

Maybe some people just want it without doing that, no reason we can’t they just don’t want us seeing the number go down so quick
Score: 24 Votes (Like | Disagree)

? How lazy can one get. You swipe down to see the control center and there is the battery percentage. Takes like one second.

I don’t even care about seeing battery percentage until it goes into power save mode. Then I just swipe down and look in control center when ever I want. One second is all it takes …

Good for you if you don't care, but I think many of us would rather not have to stretch our hands to the top of the screen just to look at a battery percentage, especially those of us with Max-size phones
Score: 19 Votes (Like | Disagree)

contacos
because they got lazy and go by one development fits them all. We will see a weather app on iPad before that. However, maybe they are waiting for M2 and 16 GB of RAM for that. The rain drop animations are very power consuming
Score: 16 Votes (Like | Disagree)
Read All Comments

Wednesday October 27, 2021 3:54 am PDT by Tim Hardwick
If you bought a new MacBook Pro and you're having a hard time acclimatizing to the notch at the top of the screen in the middle of the menu bar, there's an app for that. The inclusion of a display notch on the redesigned MacBook Pros was a surprise to most observers and was one of the few last-minute rumors that surfaced ahead of their unveiling. Some have since criticized Apple's design ...
Read Full Article • 201 comments