Apple hasn't released full details on the Apple Watch Series 7 as of yet because it's not set to launch until later this fall, but the new Apple Watch bands that came out today confirm that the Series 7 will be available in 41mm and 45mm sizes. 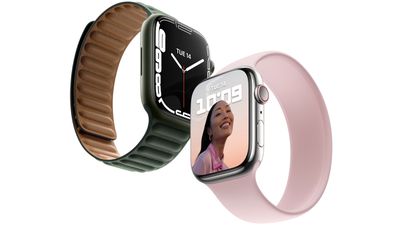 41 and 45mm size updates were rumored, as was the significant redesign for the display, but the design of the Apple Watch itself came as a surprise. Multiple rumors from Jon Prosser, Apple analyst Ming-Chi Kuo, Bloomberg, and other sources suggested the Apple Watch Series 7 would see a flat-edged design similar to the iPhone 12 models, but that did not happen.

The new Apple Watch models have an edge-to-edge display with super slim bezels, best illustrated in Apple's image comparison of the Series 7, Series 6, and Series 3.

According to Apple, the Apple Watch Series 7 offers 20 percent more screen area than the Series 6 with a 40 percent reduction in border size.

ThE.MeSsEnGeR
What intrigues me is how with each iteration of devices (iPhone, iPad and Watch), the screen real estate gets slightly larger and larger, we notice the difference and move on. But a few years later, looking back at the original first gens, the screens look so outdated and clumsy.
Score: 25 Votes (Like | Disagree)

jmpage2
Ya know, my hair not really being blown back with this supposed "redesign".
Score: 24 Votes (Like | Disagree)

svish
Was expecting flat edged design. Very suprised that this did not come true. Support for existing watch bands is a great relief.
Score: 22 Votes (Like | Disagree)

jmpage2
Nearly every rumored enhancement to the Apple Watch has turned out to be false.

Pretty much a nothing burger. I might still end up having to get one since the battery life on my Series 4 has gotten pretty bad.
Score: 21 Votes (Like | Disagree)

who thinks like me? iwatch 7 is actually a joke...

For one thing, it's not called an iwatch
Score: 18 Votes (Like | Disagree)

Techwatcher
Why is the Series 3 immortal
Score: 15 Votes (Like | Disagree)
Read All Comments

Wednesday January 26, 2022 7:32 am PST by Mitchel Broussard
Amazon is offering fresh discounts across the entire Apple Watch Series 7 lineup today, with $50 markdowns across the board on 41mm and 45mm GPS and cellular models. Every model is shipped and sold directly by Amazon, with stock available for shipping today for most devices. Note: MacRumors is an affiliate partner with some of these vendors. When you click a link and make a purchase, we may...
Read Full Article • 6 comments