BMW's upcoming flagship electric vehicle the "i4" features one of the most integrated Apple CarPlay experiences yet, recent promotional material has shown. 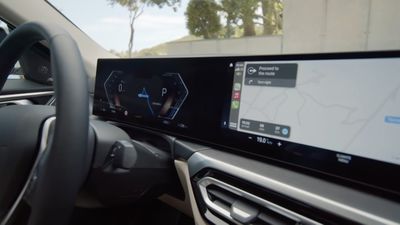 BMW describes the Apple ‌CarPlay‌ experience in the i4 as "even more seamless." The i4 features two curved displays and a heads-up display. All three displays can display information from Apple ‌CarPlay‌ simultaneously.

The BMW i4 features iDrive 8, which supports wireless Apple ‌CarPlay‌, turn-by-turn Apple Maps prompts in the heads-up display, and ‌Apple Maps‌ and directions in the instrument cluster.

The new-generation BMW iDrive 8's higher degree of flexibility makes in-car use of third-party apps even simpler and more convenient in the future. BMW iDrive 8 features full integration of Apple CarPlay and Android Auto. The control display's large screen clearly presents all available apps in the system's menu. The user's favorite apps can be launched quickly and easily either via the main menu or the toolbar. The increased integration of app functions into the information display and even the BMW Head-Up Display also results in seamless transition throughout the screen grouping. And music streaming and communications apps are now integrated within BMW iDrive 8. They are displayed as original sources in the main menu, enabling customers to make full use of their apps' functions.

Many recent vehicles with Apple ‌CarPlay‌ already feature limited turn-by-turn directional information fed from ‌Apple Maps‌ on the driver's display, but BMW's full integration of ‌Apple Maps‌ into the instrument cluster is among the first implementations of its kind.

‌Apple Maps‌ and navigation information is displayed in the middle of the instrument cluster, unifying with BMW iDrive's interface that is laid on top of it.

A look at the BMW i4's ‌CarPlay‌ integration and ‌Apple Maps‌ in the instrument cluster may be seen from 08:40 in the video.

Turn-by-turn prompts and ‌Apple Maps‌ in the second display have been supported in CarPlay as of iOS 13, but BMW is among the first to have implemented the full view of ‌Apple Maps‌ in the second display instrument cluster. BMW appears to be using a large number of Apple developer features such as independent night mode per H.246 stream to accomplish this close integration.

BMW has been an early adopter of Apple vehicle-related software features, such as Digital Key and Ultra Wideband Digital Key Plus, in recent years, although it only started offering CarPlay in 2016 and came under fire for charging a $80 per year fee for access to it, before reneging on the subscription following negative feedback.

The BMW i4 launches in Europe later this year and in the United States in summer 2022.

It’s pretty pathetic that the charge $80/year for CarPlay. Apple should restrict them from doing that.

macpro2000
Yea, mine isn't as "Futuristic" but I think the integration is still pretty dang cool.

Attirex
MR forum members who are also wealthy Orange County residents debate the merits of BMW vs. Mercedes in 3...2...1....
Score: 18 Votes (Like | Disagree)

Did you even read the last paragraph? FFS

The faith you have in Macrumors' journalists is wildly misplaced.

Original version of the article, pre-edit, still open on my phone:


An honest reporter would highlight their mistake and why they rectified it, to prevent hounding of loyal users...

ddtmm
It’s pretty pathetic that the charge $80/year for CarPlay. Apple should restrict them from doing that.
Score: 15 Votes (Like | Disagree)

Somian
This is awesome! I’d be really interested in this car if it wouldn’t have this hideous huge grille.
Score: 13 Votes (Like | Disagree)
Read All Comments

Wednesday December 22, 2021 1:11 pm PST by Juli Clover
Apple Maps Product Lead David Dorn and Design Lead Meg Frost recently did an interview with CNN to explain the Apple Maps features that were introduced with the iOS 15 update and to explain why iPhone users should choose Apple Maps over other mapping apps like Google and Waze. According to Dorn, there are three major reasons why Apple Maps is the best choice. Apple is making serious...
Read Full Article • 336 comments

Thursday October 7, 2021 4:28 am PDT by Sami Fathi
Apple is looking to expand CarPlay's functionality to include controls for core car functions such as the air conditioning system, radio, speedometer, seats, and more, according to a new report from Bloomberg. The project, internally codenamed "IronHeart," is still in its early stages but would include Apple working with carmakers to expand CarPlay's functionality to control core car...
Read Full Article • 158 comments

Wednesday January 5, 2022 6:07 am PST by Joe Rossignol
For those interested in adding wireless CarPlay to their vehicle on an aftermarket basis, Alpine today introduced its next-generation Halo receiver with an 11-inch capacitive touchscreen that hovers over the dashboard. Despite having such a large screen, the receiver has a single-DIN chassis, allowing it to be installed in a wide range of vehicles. Alpine's previous Halo receiver was limited ...
Read Full Article • 126 comments

Tuesday October 12, 2021 7:33 am PDT by Joe Rossignol
Infiniti today announced that most of its 2020 and newer vehicles are now eligible for a complimentary upgrade to wireless CarPlay in the United States. The free software update is available for 2020 and 2021 models of the Q50, Q60, QX50, and QX80 from now until March 31, 2022, according to Infiniti. Owners of these vehicles can schedule an appointment at an Infiniti dealership to have the...
Read Full Article • 51 comments