With Apple's third-generation AirPods believed to be arriving alongside the iPhone 13, which is just a few weeks away, we have compiled all of the coherent rumors from our news coverage to build a full picture of the features and upgrades coming to the company's next-generation wireless earbuds. 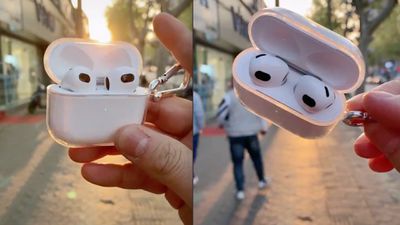 AirPods 3 clones in a clear case, reportedly showing the next-generation design.
It is worth noting that the rumors below are aggregated from our coverage from a wide range of sources, including leakers, analysts, and publications. The reliability of each source varies, so some of the rumored features may be taken with a pinch of salt.

Nevertheless, the overall view of the third-generation AirPods rumors gives a good idea of many of the upcoming upgrades and what users can largely expect from the true wireless earbuds when they are officially revealed in the near future.

It would also not be unreasonable to expect the next-generation AirPods to feature improved sound quality and better battery life, but there have been no rumors about these aspects thus far.

The entry-level AirPods are expected to continue to forgo higher-end features such as Active Noise Cancelation and Transparency to remain clearly differentiated from the ‌AirPods Pro‌. This may also explain the continued absence of in-ear silicone tips.

Apple's second-generation AirPods launched in March 2019, making them almost two and a half years old. If these new features do come to the third-generation AirPods, the new model could shape up to be a worthwhile upgrade for many users. 52audio believes that the new ‌AirPods‌ will be priced at $150.

Most indications seem to be pointing to Tuesday, September 14 as the most likely event date for the announcement of the third-generation AirPods and iPhone 13 models, and we could see event invites go out as soon as next week.

DCstewieG
Am I the only one who likes the tapping for control? Especially in winter when I can put my hat over my ears and still control them even wearing gloves.

I never understood the complaints that it’s painful pressing them into your ear, they take really light taps.
Score: 18 Votes (Like | Disagree)

cameronp16
Shorter stems and no in-ear tips are perfect for me. My ears have always liked the feel of the "standard" Apple earbuds rather that in-ear ones.

I expect a small price hike, but my wallet is ready. My Gen 1 AirPods are getting long in the teeth and the battery life barely lasts an hour of listening to music now.
Score: 14 Votes (Like | Disagree)

Bane-Thunder
I look more forward to this update than the phone. Its time to upgrade my AirPods. And I'm so glad they're not copying the rubber tips of the pro gosh those old rumours were hurting my soul, cant stand rubber tips on headphones.
Score: 6 Votes (Like | Disagree)

Am I the only one who likes the tapping for control? Especially in winter when I can put my hat over my ears and still control them even wearing gloves.

I never understood the complaints that it’s painful pressing them into your ear, they take really light taps.

Nope, you're not alone. The squeeze controls of the Pros are my only real gripe with them. They never work for me. I'll squeeze and the only result is pulling the F'ers out of my ear. Trying to skip track while jogging has resulted in the thing falling out of my ear instead because surprise surprise: delicately manipulating a tiny stem with a thumb and forefinger while bouncing around = failure. This is why I ultimately kept my Gen 2 standard Pods for the gym and jogging trail.
Tap controls are the better solution, and I cannot for the life of me understand why Apple was so dead set on moving away from them.
Score: 6 Votes (Like | Disagree)