With its mid-band 5G network that's widely available, T-Mobile has earned the title of fastest U.S. mobile network in 2021, according to testing conducted by PCMag. 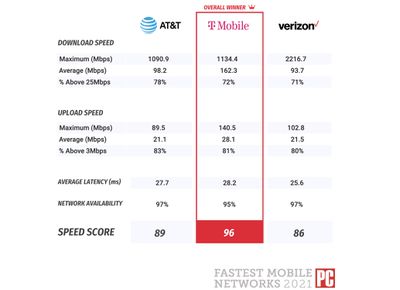 Each year, PCMag sends drivers to traverse thousands of miles of the United States. This year, drivers traveled over 10,000 miles and surveyed network speeds in 30 major metro areas and six rural regions to find the fastest carrier. T-Mobile had the fastest 5G speeds in 24 cities and rural areas, while AT&T won out in eight locations and Verizon won in two.

Verizon had the fastest maximum speeds overall, but T-Mobile had the highest average speeds at 162.3 Mb/s, beating out AT&T and Verizon, which came in at 98.2 Mb/s and 93.7 Mb/s, respectively. T-Mobile earned a total speed score of 96, while AT&T received an 89 and Verizon received an 86.

T-Mobile's mid-band spectrum covers more than 165 million people across the United States thanks to its Sprint acquisition, and it was able to deliver the most consistent results. According to PCMag, T-Mobile's speeds between 150 Mb/s and 500 Mb/s were far better than what Verizon and AT&T were able to deliver in most areas.

It's worth noting that T-Mobile only wins out when it comes to 5G speeds, and a 5G phone is required to take advantage of the 5G network. When it comes to 4G speeds, AT&T was the winner. AT&T also outperformed T-Mobile in rural areas, most notably in the western United States.

Verizon's 5G was by far the fastest 5G because of its mmWave availability, but those speeds are highly limited to major metro areas and are not accessible to most people at this time. Just 3.27 percent of PCMag's metro area tests saw Verizon's mmWave connectivity available. Verizon's 5G network turned out to be slightly faster than its 4G network when taking into account total 5G availability.

AT&T's 5G network was slower than its 4G network in most tests, so for AT&T, PCMag used its 4G network results in the speed tests. According to PCMag, AT&T's network is excellent, but hasn't improved over the course of the last year.

PCMag's full breakdown of its testing results provides more insight into each carrier, with data available for each individual city that was visited during the speed test.

tills24
"Our networks are fast, because there's no passwords or security to slow it down!"
Score: 38 Votes (Like | Disagree)

TheYayAreaLiving ?
Right after the data breach ?
Score: 19 Votes (Like | Disagree)

barkomatic
Now if only they could improve their coverage
Score: 16 Votes (Like | Disagree)

SystemHasFailed
Sadly they haven't won the title of "Most Security Conscious Carrier in the US" tho.. but hey T-Mobile customers all get free McAfee for a year tho, right?
Score: 9 Votes (Like | Disagree)

roncron
I'm on Verizon and not surprised it came in last. There's no 5G in my area, but I regularly travel to two nearby cities with good 5G coverage. In those cities, 5G is no faster than LTE on my iPhone 12 Pro Max (using the Speedtest app and making sure I'm using the same server for the LTE and 5G tests).

One of the reasons I upgraded from 11 Pro to 12 Pro was for the 5G, and that hasn't turned out well for me. I hope the rest of you who are on Verizon have had a better experience.
Score: 6 Votes (Like | Disagree)

now i see it
A year later and AT&T's 5G service is STILL slower than its LTE service. AT&T for the win!
Score: 6 Votes (Like | Disagree)
Read All Comments