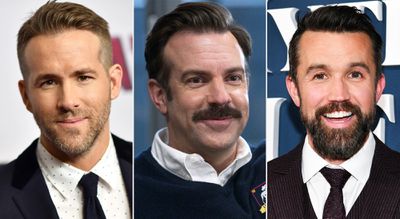 As noted by Deadline, Reynolds and McElhenney responded over the weekend by tweeting a letter that sarcastically threatens legal action against Apple TV+ over the joke.

"While we hold the incomparable Jeremy Swift in no ill regard and are honored to be mentioned on the platform that's brought us high-quality programming ranging from Mythic Quest season one to Mythic Quest season two, we must insist that you cease and desist from the casting of any doubt regarding our commitment to the club, the fans and the entire Wrexham community," the letter reads in part.

For context, McElhenney is one of the creators of "Mythic Quest," so he is sarcastically pumping up his own Apple TV+ series.

Reynolds and McElhenney added that, in order to avoid legal action, Apple was required to send two large boxes of Ted Lasso's biscuits to Wrexham AFC's stadium prior to the club's season opening match on Saturday. Apple TV+ responded with a tweet saying that it has a team of 2,000 lawyers furiously baking. It would be humorous if Apple actually delivered on the promise, but sadly the actors have yet to follow up with any evidence.

Thank you so much for your reasonable arbitration request, Rob. Our team of 2,000 lawyers are furiously baking as we speak... https://t.co/GMutZqLLFr — Apple TV (@AppleTV) August 21, 2021

Apple TV+ is priced at $4.99 per month or $49.99 per year and provides access to a growing library of original TV shows and movies, including "Ted Lasso," which has been a massive hit for the service and a strong marketing asset. The first season of the show won multiple major awards and the second season is currently underway.
Tag: Apple TV Plus Guide
[ 73 comments ]

mattopotamus
People not watching Apple+ because it is Apple sure are missing out on quality TV.
Score: 15 Votes (Like | Disagree)

Viral marketing, nothing more, nothing less. Nowadays crap like this is planned out well in advance.

ikramerica
Are those 3 pictures of the same person?
Score: 6 Votes (Like | Disagree)

This is incredibly cringe. Brown nosing to Apple to get a mediocre show extended

Which mediocre show are you talking about... The excellent Mythic Quest or the amazing Ted Lasso?
Score: 5 Votes (Like | Disagree)

jasheeky
The show really did a good job of portraying those biscuits as something very delectable. Can't say I blame their demands, haha
Score: 4 Votes (Like | Disagree)
Read All Comments

Apple Renews 'Carpool Karaoke: The Series' for a Fifth Season, Migrates It to Apple TV+

Sunday August 29, 2021 5:35 am PDT by Tim Hardwick
Apple has made season one of mystery drama "Home Before Dark" available to watch for free on Apple TV+ for a limited time, no subscription required. The official announcement, delivered on Saturday in a tweet, comes three weeks after the conclusion of the second season. "Home Before Dark" is a drama series about Hilde Lisko, a child journalist who published a newspaper called the Orange...
Read Full Article • 44 comments

Monday January 24, 2022 9:20 am PST by Juli Clover
AT&T today announced the launch of upgraded AT&T Fiber plans, which support speeds of up to 5 Gigabits for some customers. There are two separate plans, one "2 GIG" plan and one "5 GIG" plan, available to new and existing AT&T Fiber subscribers. According to AT&T, the new plans are available to nearly 5.2 million customers across 70 metro areas including Los Angeles, Atlanta, Chicago, San...
Read Full Article • 241 comments