Upcoming Apple TV+ movie "The Tragedy of Macbeth" is set to premiere at the BFI London Film Festival on the final day of the event, Sunday, October 17. 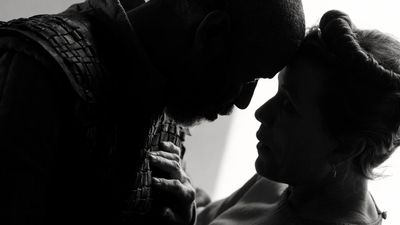 Apple also plans to offer preview screenings of the film at London Film Festival partner cinemas across the UK.

Written by Joel Coen, "The Tragedy of Macbeth" is set to star Denzel Washington and Frances McDormand. Filmed entirely in black and white, the movie is described as a "bold and fierce adaptation of Shakespeare's classic, a tale of murder, madness, ambition, and wrathful cunning."

"The Tragedy of Macbeth" is the first film directed by a single Coen brother. Joel Coen and his brother Ethan Coen have been responsible for hit movies that include "The Big Lebowski," "No Country for Old Men," "Fargo," and "O Brother, Where Art Thou?"

Apple announced that it had acquired the rights to the movie back in May, and the film is being produced by Apple partner A24. Apple has previously worked with A24 on "On the Rocks," starring Bill Murray and Rashida Jones.

After premiering in theaters, "The Tragedy of Macbeth" will be available on ‌Apple TV+‌, but Apple has not yet provided a date for its availability.

555gallardo
The first Apple drama in a long time and it includes “Mac” in its name. Am I even surprised?
Score: 9 Votes (Like | Disagree)

all this Apple tech i had to pay for to get absolutely the best colour reproduction and they release crap in black and white. what.

Surely this was the filmmaker’s vision, not Apple’s. Both color and b&w films can be beautiful.
Score: 6 Votes (Like | Disagree)

macdos
By permission
of Mr. Jobs
a
Joel Coen Production
of
Mr. Cooks' Presentation
of
Apple Computer, Inc.
of
The excellent and Lamentable Tragedie
of
MacBeth
by
William Shakespeare
With Mr. Cooks as MacDuff.
At Three of the Clocke in th'Afternoon.
Score: 5 Votes (Like | Disagree)

happydude
this will be great. Coen, Denzel, McDormand...can't wait!
Score: 5 Votes (Like | Disagree)

EOCIRL
Why did I read that initially as "The Tragedy of Macbook"? Haha
Score: 4 Votes (Like | Disagree)

Why did I read that initially as "The Tragedy of Macbook"? Haha

Ironically it’s believed Shakespeare wrote most of his plays on a PowerBook.
Score: 4 Votes (Like | Disagree)
Read All Comments

Monday August 30, 2021 11:44 am PDT by Juli Clover
Apple has inked a deal for "Raymond and Ray," an upcoming movie that's set to star Ewan McGregor and Ethan Hawke. The film is about two half brothers who have lived together in the shadow of their father, but still have a sense of humor. After their father dies, they have a chance to reinvent themselves."Raymond and Ray" follows half-brothers Raymond (played by Ewan McGregor) and Ray (played ...
Read Full Article • 45 comments