Apple appears to be expanding on the native Apple Maps review functionality that it first introduced in iOS 14, allowing ‌Apple Maps‌ users in the United States the option to review places of interest, restaurants, and other locations. 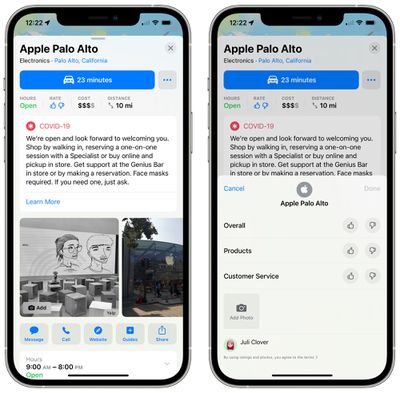 In the ‌Apple Maps‌ app in iOS 14 and iOS 15, U.S. users can now see an option to provide a thumbs up or thumbs down for most locations. Tapping on the thumbs up/down icon brings up a secondary interface for providing thumbs up and thumbs down ratings for various categories like products, customer service, food, atmosphere, and more, based on the location being reviewed.

Users also have the option to upload photos of the location to the ‌Apple Maps‌ app to be added to the maps listing.

At the current time, the ‌Apple Maps‌ native rating system is displayed alongside the Yelp ratings that are provided for various locations. Apple may eventually be planning to replace Yelp and TripAdvisor integrations, but will need to build up a database of ratings before that will be possible.

There are no options for written reviews at this time, however, so it is not clear if Apple plans to entirely replace Yelp.

Native rating options in the ‌Apple Maps‌ app appear to be new for users in the United States, but Apple has been testing the feature in other countries like the UK and Australia for some time now. Ratings may also be available in additional countries based on the Ratings and Photos Terms legal site for Maps that was shared on Reddit.

LeadingHeat
The worst is when you want to look at more than 3 pictures from the restaurant and it takes you to the App Store to redownload Yelp. This will be a welcome addition, I just wish they allowed text to be inputted so we can fully replace Yelp!
Score: 17 Votes (Like | Disagree)

GeoStructural
Finally, I hate having to open the Yelp app just to read a review or see some pictures. Sometimes deciding between two restaurants or which landmark to visit in a short trip is based on reviews, I think this feature is great.
Score: 13 Votes (Like | Disagree)

TheYayAreaLiving ?
Wow! this is going to be very helpful. Welcome Addition to Maps.

I hate having to deal with the YELP and GOOGLE.
Score: 10 Votes (Like | Disagree)

On the flip side, why buy something you can build and source yourself?
Score: 9 Votes (Like | Disagree)

A. They’re looking for reviews
B. They had a bad experience and want to complain

The third and just as important reason isn’t compelling enough to visit a site/app and spend time reviewing: they liked the place.

Ditching the star system is the first good move. A simple thumbs up or down, is going to yield a more universal standard. Written reviews almost always skew negative. People generally write good reviews if the place was off the charts amazing or if they were given an incentive (monetary, promotional, discounts).

Finally, reviews are only as reliable as the most recent ones. Good reviews from years ago may not mean much if the place hasn’t renovated in a long while, the rotating staff of waiters are currently lazy/rude and the star chef hasn’t worked there in a while. Similarly, bad reviews might’ve compelled a business to improve or the place was so bad that it has shut down. So a back catalogue of reviews isn’t all that valuable. Yelp doesn’t have much of an edge due to its ”head start”.

All of this comes together as poor data quality and so Apple doesn’t need Yelp to gradually assemble a more accurate sense of reviews. With its established user base of hundreds of millions, and with the ratings built in natively, Apple can get recent reviews rather quickly. Ultimately, being natively integrated, that picture you took of a steak dinner can be recognized as food by Photos’ machine learning and correlated to the GPS coordinates of a restaurant you went to. A simple prompt by Siri “Did you like it?” with a thumbs up/down, can help Apple fill in those reviews over a short period of time.


UPDATE: This just showed up for me in Canada. I’m a Canadian user with a Canadian Apple ID on iOS 15 Beta 6 Looks like we’re getting a wider rollout.


I was able to add photos to public art in Maps.

Yeah I hate seeing Yelp reviews in Maps. I hope this means that Yelp is going away sooner rather than later.

Yelp does nothing but ruin honest businesses with their predatory practices. I am hoping the Apple solution will be little more tolerable for small business owners.
Score: 7 Votes (Like | Disagree)
Read All Comments