With the release of iOS 14 and macOS 11, Apple introduced a new way for users to review places of interest and upload photos to Apple Maps that doesn't rely on third party integrations like Yelp and TripAdvisor. 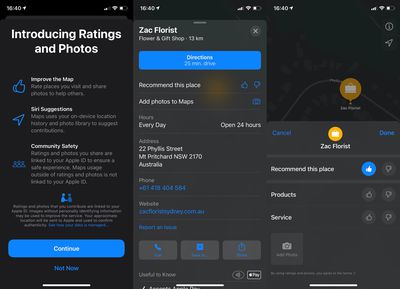 Users who tap a marker for a place on the map that they have physically visited are offered the ability to recommend a place using a thumbs up/thumbs down rating that can also distinguish between relevant categories, such as ratings for the quality of products and services in a shop, for example. An "Add Photos to Maps" option in place cards also lets users upload pictures directly to Apple's Maps servers.

As it stands, Apple's rollout of native ratings in Maps has been patchy, with users in the United Kingdom, Australia and a handful of other regions able to recommend places they've visited. Apple's in-house ratings remain unavailable for places of interest in the United States, for both users in and outside the country.

However, a brief shot from Tuesday's "Spring Loaded" Apple event, spotted by an eagle-eyed Redditor, suggests that could be set to change very soon. During the iMac announcement, Apple showed a macOS desktop screen with the Maps app open and a thumbs up/thumbs down recommendation option for Joshua Tree National Park in Southern California.

Notably, the image shows that Yelp reviews are still listed, indicating that Apple is continuing to provide third-party recommendations alongside its own ratings system as it works to build up a database of crowdsourced reviews across the States.

While we can't be certain, the likelihood is that Apple will make native Maps ratings available for U.S. places of interest with the release of iOS 14.5 and macOS 11.3 sometime next week.

DinkThifferent
Good! Yelp is terrible, especially in countries that are not the United States of America. Here in The Netherlands some most recent Yelp reviews about a restaurant are 3 years old.

Glad Apple is improving this. I cannot wait to try this new Apple Maps feature in 2028.
Score: 8 Votes (Like | Disagree)

bennyf
If Yelp wouldn't force its app over the website I wouldn't really care that much either way. Where I am, Yelp reviews are usually pretty accurate: if a place has a bunch of "this place is filthy" reviews, it's almost always true.
Score: 6 Votes (Like | Disagree)

BF1M
Yea Yelp is trash and I’m not sure why it still exists.

Hopefully we can eventually add our own pictures.
Score: 5 Votes (Like | Disagree)

Adam Spicar
So looking forward to this! Yelp has extortion practices and is a horrible business. Here in the US there are class action suits against them as well as many sad stories by business owners that were hurt and extorted by Yelp.
You can Google “Yelp extortion” to learn more. It’s thousands upon thousands of businesses that were affected by their dirty practices. Apple knows about it too, and I’m excited about Yelp being booted out.
Score: 4 Votes (Like | Disagree)

xxray
Thank goodness. The Yelp reviews are often few and outdated and require a different app. But I hate using Google Maps for privacy reasons.
Score: 2 Votes (Like | Disagree)
Read All Comments