Apple today seeded new betas of iOS and iPadOS 15 to public beta testers, allowing non-developers to download and test the updates ahead of their fall release. The fifth public betas come one week after Apple released the fourth public betas. 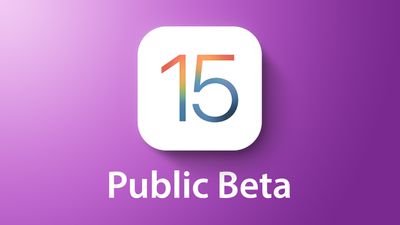 Public beta testers who have signed up for Apple's beta testing program can download the iOS and iPadOS 15 updates over the air after installing the proper certificate from the Public Beta website.

iOS 15 is adds new features for FaceTime, tools for reducing distractions, updated notifications, and privacy enhancements. ‌FaceTime‌ supports SharePlay for watching TV, listening to music, or screen sharing with friends, while a Shared with You feature keeps track of the songs, website links, pictures, and more that friends send you.

Focus is designed to help keep you on task by cutting out notifications you don't want while you're busy, and there's a new notifications summary feature that prevents you from being inundated with unimportant notifications throughout the day.

Safari has a redesigned look with a compact tab bar that's located at the bottom of the screen (which is optional as of this beta), plus Tab Groups let users save open tabs for later. Maps has a new zoomed out globe view and a new 3D view in select cities, plus there's more road detail and an AR-based walking direction feature.

The Wallet app will support IDs and more kinds of keys in iOS 15, and Photos gains updates to Memories and a new Live Text feature that uses on-device intelligence to recognize the text in an image, making it searchable and copyable. Spotlight is better than ever, and processing for Siri requests is now done directly on device.

Mail Privacy Protection in the Mail app stops senders from seeing your IP address and knowing if you've opened up an email, and an App Privacy Report gives you details on how often apps use permissions like camera and location access.

The newest beta introduces some significant Safari changes that allow users to choose between the iOS 15-style bottom address bar in Safari or the iOS 14-style top address bar, plus it removes the SharePlay feature. Apple is pulling SharePlay for now and plans to reintroduce it at a later date after iOS 15 has launched.

Apple has also seeded new publics beta of tvOS 15 and watchOS 8 to its public beta testing group. tvOS 15 can be downloaded by opening up the Settings app on the ‌Apple TV‌, navigating to the Software Updates section under "System," and then toggling on "Get public Beta Updates" after signing up to beta test on Apple's public beta website.

watchOS 8 can be downloaded can be downloaded after upgrading your iPhone to the public beta version of iOS 15. After installing ‌iOS 15‌, the proper ‌watchOS 8‌ profile from Apple's beta software website must also be installed. The software can be accessed by going to General > Software Update in the Apple Watch app on ‌‌iPhone‌‌. To update, ‌Apple Watch‌ needs to have 50 percent battery life, it must be placed on the charger, and it must be in range of the ‌‌‌‌‌‌‌‌‌iPhone‌‌.

Hooray! Can’t wait to get rid of that crappy floating address bar.

I have no issues with Public Beta 5 and just upgraded to this. This is on my 12 Pro Max daily driver. For my usage, no difference between 14.x and this.
Score: 2 Votes (Like | Disagree)

So are we just not doing public WatchOS updates now?

I don’t believe you can revert to previous versions on WatchOS so apple is probably just avoiding it.
Score: 1 Votes (Like | Disagree)

maxfromdenmark
Installed at once and the only thing I did I reverted to old Safari. I was curious about the new one but I can’t stand it ?
Score: 1 Votes (Like | Disagree)
Read All Comments