Apple has been seeking to add geographic diversity to its supply chain for some time, with a shift of some production of the AirPods lineup to Vietnam being one significant step for the company. 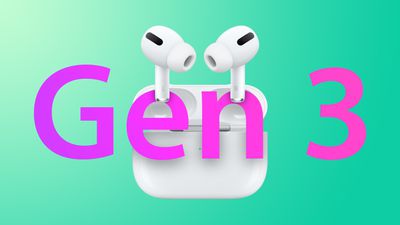 Apple reportedly began trialing production of regular ‌AirPods‌ in Vietnam over a year ago, and it was reported in December that Apple's ‌AirPods‌ suppliers were looking to line up financing to expand production.

Originally, those plans also included the upcoming AirPods 3, but those plans have changed. According to a new report from Nikkei Asia, Apple has had to begin mass producing the third-generation AirPods in China rather than Vietnam because of disruptions related to COVID-19 outbreaks.

Apple will start mass-producing its latest AirPods earphones in China instead of in Vietnam as previously planned, two people familiar with the situation said. The company still hopes to move around 20% of new AirPods production to Vietnam later, they said.

Apple's plan to bring some MacBook and iPad production to Vietnam has also been put on hold due to stricter border control measures in China and Vietnam, which has resulted in a lack of engineering resources and an incomplete supply chain, according to the report.

One of the problems is said to be the need for so-called "new product introductions," where companies and suppliers work together to develop and produce a completely new product. This has been especially difficult in Vietnam due to the lack of engineers able to work on ‌AirPods 3‌ and other new devices.

Following the height of U.S.-China trade tensions two years ago, Apple, Google, and Amazon all initiated moves to shift some production to Vietnam. Google had intended to produce the Pixel 5 range there early last year, but the smartphones ended up being made in China.

Meanwhile, Amazon is facing delays in the production of smart doorbells, security cameras, and smart speakers, as assembly lines in the northern part of the country coped with a surge in local COVID cases and tougher infection prevention measures.

According to an IDC analyst quoted in the report, any setback for Vietnam is likely to be temporary, as the country has already established itself as a key alternative manufacturing location outside of China.

The new AirPods were initially rumored to be launching in the first half of 2021, but in March, Apple analyst Ming-Chi Kuo and DigiTimes said that they're not expected until later in the year, with mass production to begin in the third quarter, which means the new version will likely launch in September alongside new iPhones.

macintoshmac
Would have loved seeing Made In Vietnam on more Apple devices for a change. Looks like it will be some while before it happens.
Score: 12 Votes (Like | Disagree)

senttoschool
Have lived in Vietnam recently.

If companies think they can simply move away from China, they're in for a surprise. By this point, it's not just the cheap labor that China can provide. It's also the infrastructure, supply chains, and manufacturing talent that only China can provide as a full package.

In addition, even if the actual manufacturing takes place in Vietnam, many companies are still just contracting with Chinese companies who then go to Vietnam to put the products together. China also provides much of the raw materials for Vietnam. Vietnam is quickly just becoming China's China.
Score: 10 Votes (Like | Disagree)

Agreed. But I’m bored seeing Made In China and would love seeing a Made In Vietnam label on Apple devices.

Bored? what kind of lame argument is that....... Where apple makes its products is now part of your daily entertainment now?
Score: 9 Votes (Like | Disagree)

I@beck
Production in China ?? or Vietnam ?? doesn’t matter. Important is the quality has to be delivered.
Score: 6 Votes (Like | Disagree)

ELman
Made in the USA or Canada would be much more interesting news story.
Score: 6 Votes (Like | Disagree)

Really hoping they manage to fix the battery degradation issues with this version. My last pair only lasted four years until they didn’t hold a charge.

I kind of think that's to be expected, given our current battery technology (and the size of the batteries inside AirPods).

Four years seems a pretty good lifespan. The important thing is that when this happens, the product goes back to Apple for effective recycling.
Score: 4 Votes (Like | Disagree)
Read All Comments