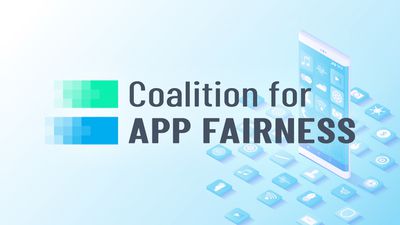 The Coalition for App Fairness says that if the subpoenas are approved, it could "chill the candor" of member discussions and the "effectiveness of the Coalition's advocacy efforts."

Yet Apple has made intrusive demands for documents and communications with not even the slightest connection to that issue, such as the Coalition's internal governance documents, financial support, public-relations strategy, and vast amounts of confidential communications between and among Coalition staff, members, and others. The true purpose of Apple's discovery requests should be obvious: the company is seeking to punish its political opponents by prying into their confidential communications through burdensome and intrusive discovery.

Communications between coalition members are "irrelevant to the claims and defenses in the antitrust cases and are disproportional to the needs of the cases," according to the filing.

The Coalition for App Fairness has asked the judge to "quash" Apple's subpoenas entirely. Apple is seeking the documentation for the class action antitrust lawsuit that it is dealing with.

IamTimCook
I wish these developers would realize their customers have voted on what they want the App Store to be.
iPhones are a fraction of the devices out there yet the App grosses over twice as much as the Google Play store.
Even Android customers don’t want to buy apps from the “open” cesspool know as Android market places.
Stop being greedy and putting your customers at risk. We have spoken, iOS users want a closed secure store.
Score: 31 Votes (Like | Disagree)

MauiPa
Oh no, we formed this bogus group to get what we wanted with little justification and tarted legal proceedings, what? the other party wants to know what is going on< this was supposed to be about them and not our made up stuff.

Seriously, for every "complaint" they came up with, they have a workaround. don't like commission, sell vbucks outside the App Store. Can't advertise on someone else's store, create your own store with links to download the apps. Pathetic really
Score: 28 Votes (Like | Disagree)

Of course documents like financial support, PR moves, are all relevant to this case. This coalition is purely anti-apple.
Score: 23 Votes (Like | Disagree)

NT1440
Wait, they’re upset about having to participate in the Discovery portion of lawsuits they are actively a party in?
Score: 18 Votes (Like | Disagree)

jz0309
I see, go and file a lawsuit and get apples internal communication but don’t be open about your own communication… sounds rather fishy …
Score: 16 Votes (Like | Disagree)

PJWilkin
Given Epic helped form the Coallition, and they are suing apple
Then the subpoenas may be valid
Score: 15 Votes (Like | Disagree)
Read All Comments

Monday October 25, 2021 1:35 pm PDT by Juli Clover
The United States Department of Justice is accelerating its antitrust probe into Apple and there is increased likelihood that Apple will face an antitrust lawsuit, reports The Information. Citing internal sources with knowledge of the investigation, The Information says there has been a "flurry" of activity as the DOJ has continued to question Apple, its customers, and its competitors about...
Read Full Article • 193 comments