Smartphone accessory makers are already busy producing iPhone 13 cases based on chassis models that supposedly give them advance knowledge of how Apple's upcoming flagship devices will be sized, and one brand has taken the unusual decision to publicly share the models they're working off on social media. 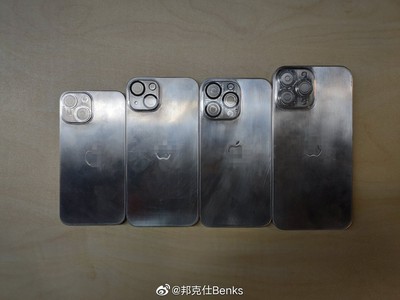 Well-known Chinese case maker Benks today posted on Weibo images of the models on which their moulds are based. Leakers DuanRui and Ice Universe were both quick to re-post the images to Twitter, and the pictures show all four of the ‌iPhone 13‌ models that we are expecting, with dimensions similar to the 2020 iPhone lineup. The four devices come in the same 5.4-inch, 6.1-inch, and 6.7-inch options, with both standard and "Pro" variants of the 6.1-inch model.

In terms of appearance, the main difference this year will be a slightly smaller notch on the front, a diagonal rear dual-camera array on the ‌iPhone 13‌ mini and the standard 6.1-inch, and a larger rear camera unit on the ‌iPhone 13‌ Pro models. Schematics seen by MacRumors have revealed that the upcoming iPhones will feature a thicker overall design and a larger camera bump on the ‌‌iPhone 13‌‌ Pro and Pro Max.

The larger camera modules are likely due to the rumored inclusion of sensor-shift stabilization for all models of the lineup and improved Ultra Wide capabilities on the ‌iPhone 13‌ Pro and ‌iPhone 13‌ Pro Max.

Case makers often base their initial case designs for upcoming iPhones based on leaks and rumors, so the images may not be true representations. However, all the information we've garnered so far would suggest there's good reason to believe they are accurate.

For the lowdown on everything we know about the new features and improvements coming with the ‌iPhone 13‌, which Apple is expected to launch in its usual September timeframe, be sure to check out our dedicated guide.

Skika
How do we know these are iPhones, the logo is clearly blurred
Score: 17 Votes (Like | Disagree)

George Dawes
Looks like the new 13 max pro will be a camera with a phone attached not the other way round
Score: 8 Votes (Like | Disagree)

Htsi
Generally the S lines age better. This shouldn’t be any different.
Score: 8 Votes (Like | Disagree)

LFC2020
What happened to apple stopping the leaks? ??

Feels like I already have the iPhone 13 since I don’t have green tint anymore. ??
Score: 4 Votes (Like | Disagree)

ilikewhey
that camera lens size looks so disproportionate especially on the mini? but hey if it means better quality picture i'm all for it.
Score: 4 Votes (Like | Disagree)

How do we know these are iPhones, the logo is clearly blurred

I mean, for all we know that could be a Dell logo!
Score: 4 Votes (Like | Disagree)
Read All Comments

Monday July 12, 2021 10:54 am PDT by Juli Clover
Apple's 2021 iPhone models aren't expected to launch until September, but thanks to rumors, CAD drawings, and renderings, we already know what to expect. Dummy models are now circulating, and we got our hands on a set to give MacRumors readers an overview of the leaks that we've been seeing for months now. Subscribe to the MacRumors YouTube channel for more videos. We have dummy models of...
Read Full Article • 149 comments

Monday July 12, 2021 4:17 am PDT by Tim Hardwick
Apple looks increasingly unlikely to expand its LiDAR Scanner to the entire iPhone 13 lineup this year, despite some rumors to the contrary. The LiDAR Scanner is a small sensor that uses 3D sensing to measure the distance to surrounding objects up to five meters away. This technology allows for enhanced augmented reality experiences and other unique capabilities, such as the ability to measur...
Read Full Article • 41 comments