Apple today announced a new set of Apple Watch Sport Loop bands with colors representative of 22 countries around the world, alongside custom Apple Watch faces for each of those countries. 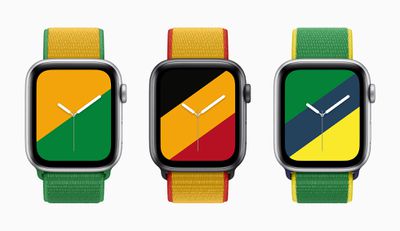 The full list of the countries represented within Apple's new "Limited Edition International Collection" can be found below:

All of the bands retail for $49.99, each with the normal "soft, breathable, and lightweight" design of the Apple Watch Sport Loop band. Each band is also accompanied by a custom Stripes Apple Watch face with the colors of the country's flag. The new bands are available for purchase and order on Apple's website starting today.

The matching watch faces can be downloaded using an App Clip code on the band packaging, but they're also available right now on Apple's website. To add any of the 22 watch faces, head to the Apple Watch page on Apple's site using the iPhone paired with your Apple Watch, scroll down to the "International Collection" featured section, and tap on "See the countries." From there, you'll be able to view details on each band and face combination and install any of the watch faces.

scheinderrob
cool i'll buy the chinese knock off for $5 instead of throwing $50 away on the official one.
Score: 23 Votes (Like | Disagree)

anthogag
A Canada watch face without the maple leaf?
Score: 13 Votes (Like | Disagree)

Jamaica is a very random choice

Khedron
Those are terrible bands.

For comparison, look at how well Apple incorporates multiple colours in the new pride band below.

These new bands would be overpriced at $2.

Deals: Get Up to $50 Off Apple Watch Series 7 Models on Amazon

Wednesday February 2, 2022 7:30 am PST by Mitchel Broussard
Apple Watch Series 7 deals have continued on Amazon this week, offering up to $50 off nearly every model of the 41mm and 45mm Apple Watch Series 7. Every model is shipped and sold directly by Amazon, with stock available for shipping today for most devices. Note: MacRumors is an affiliate partner with some of these vendors. When you click a link and make a purchase, we may receive a small...
Read Full Article • 11 comments

Monday December 27, 2021 9:18 am PST by Mitchel Broussard
Now that Christmas has come and passed, many people have opened up a brand new iPhone, iPad, Mac, Apple TV, or Apple Watch over the past few days. In this article we've rounded up the current best deals on official Apple iPhone cases, Apple Watch bands, power bricks, MagSafe accessories, and more, which should all be helpful for new Apple device owners. The sales below will be found at Amazon. ...
Read Full Article • 17 comments