American Airlines plans to roll out new iPhones and iPads to pilots, flight attendants, gate agents, and aircraft maintenance technicians over the next year, according to a company memo obtained by View from the Wing. 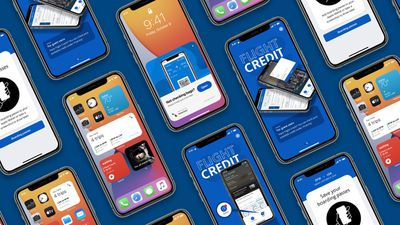 The airline started rolling out the iPhone 12 to its gate agents at Reagan National Airport in Washington, D.C. earlier this month, allowing agents to offer service to customers wherever they are in a terminal, per the memo. If the test program is successful, the iPhone 12 will be rolled out to all of the airline's agents over the next year.

American Airlines maintenance technicians have started receiving the seventh-generation iPad, the memo added. Once that rollout is complete by the end of June, they will no longer need to carry two different tablets for different aircraft and activities.

American Airlines pilots will continue to use iPads. The airline recently added a real-time weather app and a new turbulence awareness app to the devices.

Starting in the first quarter of 2022, American Airlines flight attendants will receive an iPhone 12 for customer service and flight management purposes, according to the memo. The new iPhones will have a customized attachment that will accept multiple forms of payment for in-flight purchases, including contactless payments like Apple Pay.

fwmireault
I guess they will use iPad AIR
Score: 15 Votes (Like | Disagree)

I understand the need for some business.

Personally, I'm lucky enough to be able to refuse a company provided phone, even if one has the choice of brand and model.

I want control over my phone and be able to refuse company management, software, etc.

Good for you. Nice flex there.
Score: 3 Votes (Like | Disagree)

I@beck
I wonder why it is not iPhone Mini since it is easier to move around. Moreover, the Mini sales is not that fantastic and this could further boost up the sales.
Score: 3 Votes (Like | Disagree)

Cosmosent
Courtesy of the U.S. Gov't !
Score: 3 Votes (Like | Disagree)

Yeah, you know how randy those flight attendants are. :)

GenesisST
I understand the need for some business.

Personally, I'm lucky enough to be able to refuse a company provided phone, even if one has the choice of brand and model.

I want control over my phone and be able to refuse company management, software, etc.
Score: 2 Votes (Like | Disagree)
Read All Comments

Thursday March 24, 2022 10:18 am PDT by Juli Clover
Apple is developing a hardware subscription service that would allow customers to "subscribe" and receive an iPhone or other Apple device as part of their subscription, similar to the way current Apple subscriptions like iCloud work, reports Bloomberg. Customers would be able to pay a monthly subscription fee and gain access to a device for the subscription period. This would be ideal for...
Read Full Article • 486 comments

Friday September 30, 2022 12:51 pm PDT by Juli Clover
Apple CEO Tim Cook has been touring Europe this week, sitting down for interviews with various media publications. Augmented reality has been a running theme in Cook's discussions, and it is a topic he brought up again in an interview with Dutch publication Bright, which is part of RTL News. "I think AR is a profound technology that will affect everything," Cook said, echoing comments from...
Read Full Article • 259 comments

Sunday October 2, 2022 6:41 am PDT by Joe Rossignol
Apple is developing new iPad Pro, Mac, and Apple TV models, and at least some of these products will be released in October, according to Bloomberg's Mark Gurman. However, Gurman continues to believe that Apple is unlikely to hold an event this month. In the latest edition of his Power On newsletter, Gurman said "the big iPhone 14 unveiling last month was probably it for Apple in 2022 in...
Read Full Article • 128 comments