Apple shipped an estimated 40.4 million iPhone 12 devices during the first quarter of 2021, according to new data shared by Strategy Analytics. The figure suggests Apple has maintained its grip on the global 5G smartphone market, despite indicating a 23% dip compared to the fourth quarter of 2020, when Apple shipped 52.2 million units. 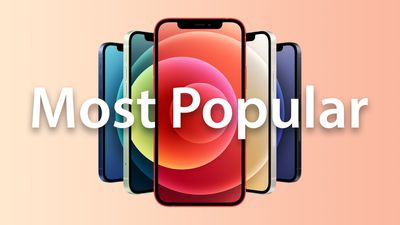 Apple enjoyed booming sales in the 5G market in the three months following the launch of in first 5G-equipped iPhone models, but since then its rivals have upped their game in an increasingly competitive premium smartphone market by releasing new 5G models.

Chinese vendor Oppo took second place in the same quarter, shipping 21.5 million units for a 15.8% market share, up 55% from the fourth quarter of last year. Fellow Sino-mobile maker Vivo managed to ship 19.4 million units, a 62% gain on the last quarter.

"We forecast global 5G smartphone shipments to reach a record 624 million units for the full-year 2021, soaring from 269 million in full-year 2020."

All of the iPhones in Apple's ‌iPhone 12‌ lineup support 5G, but not all 5G networks are equal. There's the super fast mmWave (millimeter wave) 5G and the slower but more widespread sub-6GHz 5G.

Apple currently only sells the mmWave ‌iPhone 12‌ in the United States, which allocates to only 30-35% of overall ‌‌iPhone 12‌‌ shipments. However, support for sub-6Ghz 5G networks appears to have been enough to fuel the demand for ‌iPhone 12‌ models more globally.

Apple is planning to increase the availability of 5G mmWave capable ‌iPhone‌ models to more countries around the world with the release of the iPhone 13 later this year, offering even more customers access to the faster and newer technology where the infrastructure is increasingly becoming more widely available, according to Apple analyst Ming-Chi Kuo.

dabi
Tfw I still haven't used the 5G connectivity on my 12 Pro Max even once. :D But considering my carrier's 4G goes beyond 100 mb/s I don't think I'm missing out on that much.
Score: 6 Votes (Like | Disagree)

steve09090
Remember when people said Apple were taking too long to add 5G and that Android opposition are going to be way ahead… well….
Score: 5 Votes (Like | Disagree)

All of the iPhones in Apple's iPhone 12 lineup support 5G, but not all 5G networks are equal. There's the super fast mmWave (millimeter wave) 5G and the slower but more widespread sub-6GHz 5G.

Apple currently only sells the mmWave iPhone 12 in the United States, which allocates to only 30-35% of overall ‌iPhone 12‌ shipments. However, support for sub-6Ghz 5G networks appears to have been enough to fuel the demand for iPhone 12 models more globally.

I really don't think this matters to most buyers. They don't know what any of this means. All they know is 5G is a higher number than 4G. Thus it must be better and faster.
Score: 3 Votes (Like | Disagree)

ToadyBlegh
I just got my second COVID vax and the 5g is AMAZING. Really makes everything better.

Seriously, though, we have almost full rollout of fast 5g in my area and I haven't noticed any different. I don't really use my phone for complex processing in the cloud or whatever and haven't noticed any massive improvement, even in watching videos or playing on-line games. Fast internet makes sense for a personal computer but, seriously, how many people need a 10 gig connection speed on their phone? Most of the issues it technically solves for, like network slicing and latency, were networks issues that could have been solved at a network level. Sadly, many of those network challenges will remain because most network providers are terrible and take you for granted.
Score: 2 Votes (Like | Disagree)

IceStormNG
There's barely any 5G here. Most is 5G with LTE anchor which, ahah, the iPhone doesn't support.

But anyway. LTE is fast enough for me (about 200MB/s). 5G is nice on paper... but it doesn't add a lot of benefit. Especially considering the battery impact it has.
Score: 2 Votes (Like | Disagree)

Absolute Trainwreck
We’ve all switched back to LTE. We found that when 5G works it works quite well but for whatever reason it seemed like 25% of the time even with full bars we wouldn’t be able to load data.

I’m sure it’s just a matter of time just like it was with LTE but 5G just doesn’t matter (yet).
Score: 2 Votes (Like | Disagree)
Read All Comments