Twitter is considering offering users the ability to "unmention" themselves in other people's tweets as part of a wider privacy drive for the social media platform. 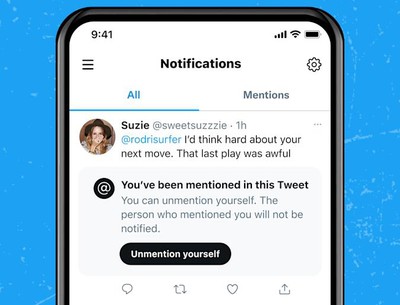 The early concept has been shared by Twitter designed Dominic Camozzi, who says the idea behind it is to help users control unwanted attention.

An example image shows a notification when the user has been mentioned in a tweet, with an option to "Unmention yourself" (i.e. remove your Twitter handle from it) without the author of the tweet being notified of the change.

In another related option currently being weighed up, Twitter could send you a notification when someone you don't follow mentions you, allowing you to review the tweet, unmention yourself from it, and block that user from mentioning you again.

Notifications Going further, if someone you don’t follow @ mentions you, you’ll get a special notification. If you unmention yourself from there, the Tweet author will not be able to mention you again. pic.twitter.com/RTFBEnkPFf — Dominic Camozzi (@_dcrc_) June 14, 2021

Additionally, Camozzi is toying with the idea of giving users the ability to "control mass mentions" by preventing anyone on the platform from mentioning them for one day, three days, or seven days, thereby providing respite for anyone inundated with activity related to their account.

As with all early concepts, these changes may or may not be implemented by Twitter, and the company is actively looking for feedback from users regarding the ideas.

videosoul
Pro: remove yourself from a conversation where someone is harassing/annoying/stalking/offending you.

Con: allows those who should be held to account to remove traces of their wrongdoing.

I suppose there is always screenshots for the latter...

(but screenshots can always be faked.....)

visualseed
so you can edit other people's tweets but not your own?
Score: 4 Votes (Like | Disagree)

contacos
Will it cost another 1 Euro though?
Score: 3 Votes (Like | Disagree)

Getting tired of this. According to the parties involved people never ever change.
I think the companies, teams, social groups and buddies should just don’t give a damn and stop bending themselves to these moves. “That racist Timmy said ‘that’s gay’ when he was 12”. Cool, thanks for the info, let us handle it from here on.
Red Bull has been quite the resistant to this it is my understanding, for example, while others fire their people for saying things like “each of us is different” or asking questions like “not all men are bad?”.

A nice solution to that (and many other forms of interference in people's private lives) would be a law saying that if the conduct happens off the clock, is not illegal, the worker has any KPIs or aspects of their job description which aren't just boosting the brand's image through association with personal virtues (i.e. pure celebrity endorsement), and the worker did not imply in any way a reasonable person would take seriously that the company endorsed it, then sacking them for it is unfair dismissal. That would also kill off things like morality clauses in employment contracts.
Score: 2 Votes (Like | Disagree)

I get the feeling this new feature is being rolled out because there has been alot of bad press recently involving twitter and historical tweets, people getting fired from their jobs because of tweets they made when as a child/teenager, celebrities coming under attack because of something they tweeted when as a teenager, same wth sports personalities.

There has been huge press coverage in the UK recently about a cricketer who was picked and played for the England national team getting suspended from the team because of historical tweets he made when he was a teenager. Someone in the media decided to go looking to see if the man had an social media history and found the tweets he made 10-11 years ago when as a teenager and due to their controversial nature, decided to print them for the world to see.

I think the feature that best deals with the is called Don’t Tweet Ever. It’s enabled by default on all your devices.
Score: 2 Votes (Like | Disagree)
Read All Comments

Friday July 2, 2021 1:59 am PDT by Tim Hardwick
Twitter is considering letting users post select tweets for "Trusted Friends" only. That's the name of a feature the social media platform is testing that would allow users to limit the audience for specific content to a smaller circle of people. Based on design concepts shared by the company (via TechCrunch), Trusted Friends could be a toggle that lets you indicate whether a tweet should be ...
Read Full Article • 33 comments