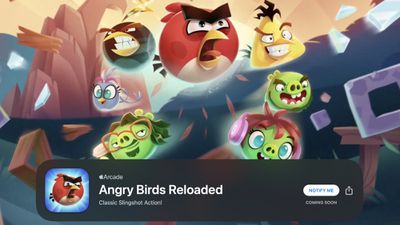 Apple announced the new games on Twitter today, and those interested in playing them when they launch on ‌Apple Arcade‌ can sign up to be notified. The three games will be available on iPhone, iPad, Mac, and Apple TV.

Some of the most memorable games to hit the @AppStore are re-launching with new versions on Apple Arcade!@AngryBirds Reloaded brings back the world’s most famous, furiousest flock, remastered with colorful new characters. ⏰ Set a reminder: https://t.co/kzcnoI2LGe pic.twitter.com/t7VMvHBUYy — Apple Arcade (@AppleArcade) June 15, 2021

Alto's Odyssey: The Lost City is an endless runner set in the desert, where the goal is to sail across dunes, canyons, and temples to unearth the secrets of the Lost City. The game offers simple tap controls that are easy to learn but tough to master, and players are tasked with building up combos and meeting goals.

In Doodle God Universe, players start out on an empty planet with four elements, and the goal is to combine these different elements to create hundreds of new elements to make the planet thrive and grow.

There's no word yet on exactly when these new games are launching, but as with all ‌Apple Arcade‌ titles, they will be available to ‌Apple Arcade‌ subscribers with no additional in-app purchases or fees. ‌Apple Arcade‌ is priced at $4.99 per month.

Other classic games that are now available on ‌Apple Arcade‌ include Fruit Ninja, Monument Valley, Threes, Mini Metro, The Oregon Trail, Cut the Rope, and more.

rcread
I once ranked in the top 100 in the world in Angry Birds. Fear not, Angry Bird competitors, I shall remain in retirement.
Score: 12 Votes (Like | Disagree)

According to who? A ten year old without a job?

Five bucks per month to play dozens of decent games with no frill and garbage and it’s not enough for you? What exactly would be a compelling service for you to justify $4.99?
Score: 9 Votes (Like | Disagree)

I wish this service was around when I was a kid. Blowing $5 in an arcade took about 15 minutes.
Score: 8 Votes (Like | Disagree)

rjp1
This is awesome

alex2792
Apple needs to put arcade out of its misery and finally allow xCloud into the App Store so people can play real games instead of Tim’s trash.
Score: 6 Votes (Like | Disagree)
Read All Comments

Tuesday August 17, 2021 9:59 am PDT by Juli Clover
Apple today announced that a new version of Temple Run is coming to Apple Arcade in the near future, and based on the game's description, it will merge classic endless runner gameplay with match 3 puzzles. Players will be tasked with assisting adventurer, archeologist, and Temple Runner Scarlett Fox, solving puzzles to overcome obstacles. Players will create powerful match 3 combos and use...
Read Full Article • 13 comments