Apple software engineering chief Craig Federighi this week did a series of interviews with YouTubers, sharing iOS 15 highlights and tidbits with them. Each YouTuber was able to ask Federighi targeted questions about the new update using FaceTime. 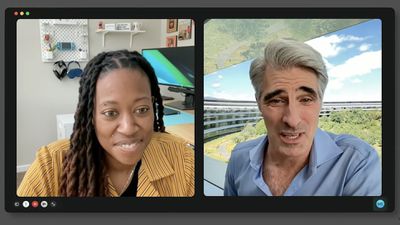 Andru Edwards talked to Federighi about Apple's focus on togetherness with iOS 15, iPadOS 15, and macOS Monterey features like SharePlay in ‌FaceTime‌ and Shared with You in Messages. "We have so many ideas that come up over time, over years. And then there comes a moment when we can suddenly connect them all in a meaningful way and they're right for the moment, and we go for it. This year was one of those," said Federighi.


"With so many of us apart having to connect over distance, we were craving that connection and that ability to be together virtually but still share things with one another and to have all that context for connection." Federighi went on to say that Apple likes to work "thematically" without just "dribs and drabs" of unrelated features. "If we can pull something together to be bigger than the sum of its parts, then that's the moment to really go for it, connect all the threads."

TechMeOut asked Federighi which iOS 15 features he's most excited about. "I think if I had to pick right now, it's probably SharePlay," said Federighi. He went on to explain that he hasn't been able to use it with friends and family because Apple had to keep it secret, so he's eager to give it a go.


French YouTuber TheiCollection spoke with Federighi about macOS Monterey and the new Universal Control functionality that will let you use a single keyboard, mouse, or trackpad across multiple Macs and iPad devices. Federighi said Apple is thrilled for the "zero setup" feature that just works. "It was a fun one to put together," he said about ‌Universal Control‌.
Other videos featuring Federighi in a series of short interviews are embedded below.

iOS 15, iPadOS 15, and macOS Monterey are all available to developers at the current time, but Apple plans to release a beta for public beta testers in July, at which point anyone who wants to will be able to test out these new features.

Techwatcher
I bet none of these youtubers asked hard hitting questions about why iPadOS is severely lacking. Probably heavy restrictions and not actually a freeform conversation.
Score: 28 Votes (Like | Disagree)

JSL1
Craig Federighi is an awesome presenter among many other things.
Score: 18 Votes (Like | Disagree)

Kylo83
They should of asked him why there is no re design, split screen, interactive widgets and why iPad was just catch up from iOS 14
Score: 14 Votes (Like | Disagree)

Bit of a shame nobody asked any decent hardhitting questions then.

Looking at the grins on the faces of these "journalists" they were wetting themselves in excitement at being able to interview an Apple celebrity. Asking an intelligent probing question was far from their minds.
Score: 13 Votes (Like | Disagree)

4jasontv
We don't need Apple to generate responses that don't answer the question.

Why can't iPad OS use the full amount of memory of my iPad Pro that i bought with an advertised 16GB of RAM?

Just because we can implement a feature doesn't mean it's the right decision to do so. We could make an OS that uses more resources, but think our customers are going to be surprised how well the free iPad OS update runs on their existing devices.

While the new multi-tasking UI is much easier to use, why are you locked into panels that are hard to switch? For example, a workflow where you are working with one primary app and copying/pasting from two other apps is not at all intuitive even with the new UI

There are a lot of ways to implement multitasking features, but we don't think anyone has gotten it perfect yet. Our newest OS's build on what we have learned from previous releases, and we think it will be the most intuitive OS release ever.

If iOS and iPad OS are built on the same code-base, why did it take a year for iPad OS to get iOS 14 features

While the code-base may be similar how people use the devices differ significantly. We wanted to ensure features were implemented for the device they would be used on. We know people are eager to use features they are familiar with on iPhone with their iPad, and we are excited to see what amazing things developers create with the new OS tools.

Why still no iPad calculator?

At Apple we constantly ask ourselves, what can we add to this market? If we can't do better than what already exists then we don't release anything. Right now there are a lot of really well-designed iPad OS calculator apps.

Why can't I safely eject an external disk from an iPad, a basic function that has been on a Mac for 40 years

The concept of the computer has changed a lot since the iPad first launched.

Why is Thunderbolt disk access on the iPad Pro half the speed of the access from a MacBook with the same chip/port on the same disk? Why do some thunderbolt disks not work at all?

Thunderbolt is a magical technology that for many is the evolution of what USB hoped to accomplish. We work with hundreds of hardware partners to build devices that work best with Apple hardware. Compared to other protocols Thunderbolt is still relatively bleeding edge, and as a result hardware manufacturers are still learning how to get the most out of their products. We believe Thunderbolt is a gamechanger and are proud it's currently available on so many Apple Devices.
Score: 12 Votes (Like | Disagree)

I bet none of these youtubers asked hard hitting questions about why iPadOS is severely lacking. Probably heavy restrictions and not actually a freeform conversation.

I don't think Apple is so strict about the questions. Last year MKBHD asked Craig about why there's no Calculator on the iPad.

So this probably shows that they're not aware of the questions they're going to be asked. That's what I think at least.
But of course, they're trying to be more kind and appealing so that they can get this chance again, rather than screwing their interview with a question that Apple refuses to talk about themselves
Score: 12 Votes (Like | Disagree)
Read All Comments