Apple Updates Leadership Page With Memojis for Execs Ahead of WWDC

Ahead of WWDC, Apple has updated its official leadership site to show Memojis for all the key executives listed on the page. Similar avatars also now appear on executives' social media accounts, as the company prepares to preview new versions of its operating system software including iOS 15, which is expected to feature major updates to the Messages app. 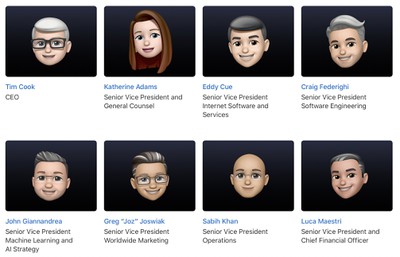 Apple has changed the profiles to Memojis on its leadership page once before. In 2018, Memoji avatars were used to celebrate World Emoji Day, the year that Memojis were an iPhone X feature coming in iOS 12. On that occasion, just the heads were replaced with Memojis, leaving the real shoulders in place.

This time around, the photos have been replaced wholesale with disembodied heads against dark backgrounds, reflecting the wider use of more advanced Memoji technology in Apple's WWDC 2021 promotional material.

Apple is holding a virtual keynote that will take place on Monday, June 7, with the event set to give us our first look at new operating system updates. We don't know a lot about this year's event, but everything that we're expecting to see based on rumors can be found in our dedicated roundup.

Apple plans to live stream the WWDC keynote on its website, the ‌Apple TV‌ app, and YouTube, but for those unable to watch, we'll be covering the event on MacRumors.com and through the MacRumorsLive Twitter account.

HerbertDerb
I think Memojis are most useless thing ever. (Apparently i'm a boomer)
Score: 54 Votes (Like | Disagree)

You're going to see some AWESOMELY crafted memojis, taking advantage of the massive computing power of the M1 processor.

Just look at the contours of the hair and the beautiful shading of the skin tones. That's the neural engine at work, creating amazing facial expressions. We're so proud of our memojis here at Apple and we know you're going to love them too; all powered by the M1 processor.
Score: 29 Votes (Like | Disagree)

BvizioN
Memojis seem to be the big theme of this event.
A clear indication that this one is gonna be pretty boring.
Score: 27 Votes (Like | Disagree)

Psychicbob
Why don’t they just use their actual photos?
Score: 22 Votes (Like | Disagree)

senttoschool
Every WWDC, they spend 20 minutes on new emojis. It's a huge waste of time.
Score: 19 Votes (Like | Disagree)

I think Memojis are most useless thing ever. (Apparently i'm a boomer)

I’m a boomer and I think Memoji’s are cool.
Score: 17 Votes (Like | Disagree)
Read All Comments