Apple today announced a range of new smart home features for HomePod mini, Apple TV, and Apple Watch, as well as third-party Siri integration on accessories for the first time. 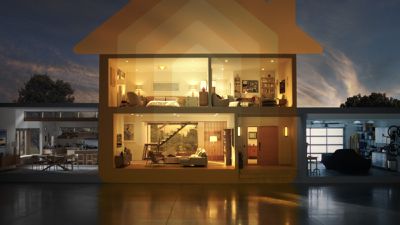 ‌Siri‌ on the HomePod now supports making commands to control content on an ‌Apple TV‌. The ‌HomePod mini‌ can also be set as a default output for an ‌Apple TV‌.

SharePlay will work with the ‌Apple TV‌ through FaceTime on another device, and tvOS now features a Shared With You row. There is also a new For All of You row in the TV app to recommend shows and movies suitable for all users on the device.

HomeKit accessory makers can now integrate ‌Siri‌ voice control for the first time. "Hey ‌Siri‌"-enabled accessories will relay requests through a HomePod or ‌HomePod mini‌, and will support ‌Siri‌ features such as Personal Requests, Intercom, timers, and alarms. The first third-party Siri-enabled smart home accessories will be available later this year.

The Home app for Apple Watch has been redesigned in watchOS 8, offering more convenient access to accessories and scenes as needed in a particular moment, and the ability to control accessories by room. Users with a HomeKit-enabled camera can view who is at their front door directly on their Apple Watch.

kp98077
i still have NO idea why they did away with the normal size home pod.... sounded SO much better than the mini...
Score: 25 Votes (Like | Disagree)

Mattb326
But can I dream and hope that Siri could be the default voice assistant on Sonos? Could we get rid of google and Alexa all together?
Score: 10 Votes (Like | Disagree)

BMox81
Get Siri in my Sonos Beam and One!
Score: 8 Votes (Like | Disagree)

AlbinoPigeon
Argh, is it too much to ask for FaceTime on the biggest screen in your home? A camera add on to ATV is the biggest no brainer and yet it’s no where to be seen.
Score: 4 Votes (Like | Disagree)

Madmic23
Whoa, they said they're opening Siri up to be added to other devices! They showed it working on an Ecobee in the video, but I want this on my Sonos One! :)
Score: 4 Votes (Like | Disagree)
Read All Comments

Tuesday July 5, 2022 6:57 am PDT by Joe Rossignol
The upcoming launch of Apple's redesigned MacBook Air with the M2 chip has some Windows laptop manufacturers "worried" that sales of Intel-based laptops will be negatively affected, according to industry sources cited by DigiTimes. "A Wintel brand vendor pointed out that at a price point of US$1,000-$1,500, the MacBook Air will crowd out other high-end notebooks," the report claims, with...
Read Full Article • 362 comments

Tuesday July 5, 2022 5:53 am PDT by Hartley Charlton
European Union lawmakers have approved landmark legislation to heavily regulate Apple, Google, Meta, and other big tech firms. The Digital Markets Act (DMA) and Digital Services Act (DSA) were proposed by the European Commission in December 2020. Now, collected in a "Digital Services Package," the legislation has been formally adopted by the European Parliament and seeks to address...
Read Full Article • 700 comments

Wednesday July 6, 2022 4:59 am PDT by Joe Rossignol
Apple today announced that the new MacBook Air equipped with the M2 chip will be available to order starting Friday, July 8 at 5 a.m. Pacific Time. Apple said deliveries to customers and in-store availability will begin Friday, July 15. MacRumors exclusively reported that Apple planned to launch the new MacBook Air on July 15, and the date has now been confirmed by Apple. Customers will be...
Read Full Article • 173 comments

Wednesday July 6, 2022 10:00 am PDT by Joe Rossignol
Apple today announced a new Lockdown Mode coming to the iPhone, iPad, and Mac with iOS 16, iPadOS 16, and macOS Ventura. Apple says the optional security feature is designed to protect the "very small number" of users who may be at risk of "highly targeted cyberattacks" from private companies developing state-sponsored spyware, such as journalists, activists, and government employees. Apple...
Read Full Article • 89 comments