Mercedes-Benz has announced that Apple Music integration is coming to its MBUX infotainment system, starting with C-Class, S-Class, and EQS models. 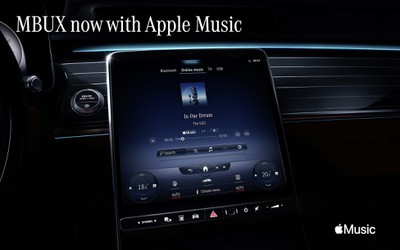 ‌Apple Music‌ will integrate directly into Mercedes-Benz's MBUX infotainment system. Users simply need to link their online "Mercedes me" account to their vehicle, and then ‌Apple Music‌ subscribers will have access to its full library of more than 75 million songs, curated playlists, radio stations, and more.

Drivers can make requests using the "Hey Mercedes" voice command or tap on the display to play songs, albums, playlists, or radio stations.

Return Zero
The name "MBUX" is so awful. It sounds like an internal engineering project nickname that accidentally stuck around all the way through marketing as a placeholder and never got replaced like it was supposed to.
Score: 13 Votes (Like | Disagree)

Great. My brand-new maxed out CLA seems to already be obsolete… should‘ve waited for the new C-class.

This was my number one request for MBUX, pretty bummed out that they don‘t add this to the other MBUX vehicles. Should‘ve accepted that MBUX senior software engineer job offer from 2 years ago to get some insight in how f***ed up management decisions are made over there.

If this is how you react to something as trivial as the inclusion a music service, I think Mercedes dodged a bullet. :D
Score: 10 Votes (Like | Disagree)

The name "MBUX" is so awful. It sounds like an internal engineering project nickname that accidentally stuck around all the way through marketing as a placeholder and never got replaced like it was supposed to.

I know nothing about Mercedes (other than my friends' is always in the shop for one thing or another), but the MBUX sounds like some gimmicky rewards program where the more you buy, the more "M-Bucks" you earn.
Score: 7 Votes (Like | Disagree)

Must have missed a few models being canceled:)

You still have carplay, you still can access your phone within the normal entertainment SW so whats the issue?
Score: 7 Votes (Like | Disagree)

I think MB is doing this because they're hoping more in-car data plans will be activated.

Also, the Daimler press release says it's not exclusive to Apple; Amazon, Spotify, and Tidal functionality are also built-in. I guess this is for people who find CarPlay too difficult to master.

If people think CarPlay (or android auto even) is difficult, they probably shouldn’t have a license to operate a two ton death machine.
Score: 6 Votes (Like | Disagree)
Read All Comments